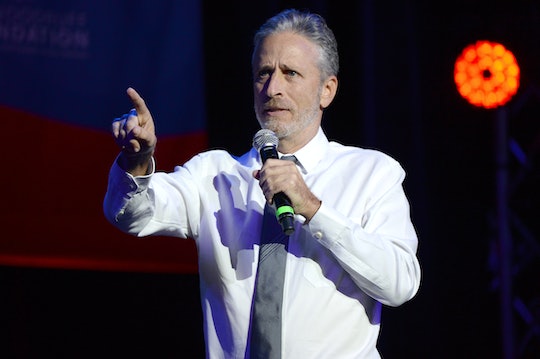 Jon Stewart Is Back, & Here's His Message To Media

Regardless of your actual opinion on President Donald Trump, one thing we can probably all agree on is that he is a president unlike anyone the country has ever seen before. One major difference between Trump and his predecessors? His unabashed dislike of the press. Trump has made no attempt to hide his disdain for the so-called mainstream media, but his most recent decision to ban certain news outlets from White House press briefings was enough of a push to get former Daily Show host Jon Stewart back on TV for a much-needed wakeup call, according to The Hollywood Reporter. Jon Stewart is back, and he had an important — and hilarious — message for the media.

To those who looked to Stewart and The Daily Show as an entertaining, yet totally on-point voice of reason throughout the '00s, the news that he would be leaving the show just as Trump threw his hat into the presidential ring was not exactly welcome. Daily Show alums Stephen Colbert, Samantha Bee, and John Oliver took over the task of leading Trump-era satirical news shows (as did Stewart's Daily Show successor, Trevor Noah), but when Stewart made a surprise appearance on The Late Show with Stephen Colbert Monday night? Well, it was pretty much exactly what we all needed to hear.

It's no surprise that Stewart isn't at all a Trump fan, but, like many Americans, he found the President's increasingly brazen attempts to shut down the media voices he didn't like or agree with to be particularly outrageous. At first, seeing him trying to write off outlets like CNN or The Washington Post as "fake news," or insulting them on Twitter simply because he didn't seem to like what they were writing about him seemed kind of funny in an eye-rolling, are you kidding me? kind of way. But the fact that his administration then began refusing questions from certain journalists, and then blocked a number of news outlets — like CNN, The New York Times, Politico, BuzzFeed and The Los Angeles Times, according to Variety — from briefings entirely started to feel straight up scary.

Stewart skewered the president in his bit, first taking aim at Trump's habit of appearing to pull "facts" out of thin air. He joked that "Trump lies more in one press conference than CNN does in a year," before adding, "and this is coming from a guy, who as you know, hates CNN," and illustrated his point with a number of examples. He showed clips of Trump claiming he had "best electoral college win since Reagan" (nope), that "the murder rate in our country is the highest it's been in 47 years" (also not true), and then, in a particularly WTF example, Stewart showed a clip of the President completely shutting down a Jewish reporter asking about anti-Semitism, and then claiming that he's "the least anti-Semitic person you've ever seen in your entire life," after he made the reporter take his seat before he even finished his question.

Of course, Stewart certainly hasn't been the only one to skewer Trump for lying, but when asked by Colbert just how he could be so sure that he was "lying on purpose," Stewart had the perfect response:

He's lying on purpose. You know how I know? Because he constantly says the phrase, 'believe me.' Nobody says 'believe me' unless they are lying.

He once again followed up with Trump footage, this time illustrating just how often the President likes to tell his audience to "believe him" (spoiler alert: it's a lot). It's hard to believe that the President of the United States could actually get away with what he says, but as far as Stewart was concerned, one of the reasons is that the media isn't holding him accountable. Jokingly comparing the media's relationship with Trump to a romantic relationship gone sour, Stewart urged reporters to get it together:

Hey media, so I heard Donald Trump broke up with you. It stings a little doesn't it? You finally thought you'd met your match, a blabbermouth who's as thin-skinned and narcissistic as you are. Well, now it's over. Well, good riddance I say. Kick him to the curb.

But more than simply accepting the breakup, Stewart said the media needed to pull itself together:

It is time for you to get your groove back, media. Because, let's face facts, you kind of let yourself go a little bit for these past few years ... Obsessing 24-hours a day, seven days a week about this one guy. 'What's Donny up to? Did he say anything about us? Do you think he's gonna come on our show?"... And the whole time you're chasing after Donny, the rest of us are thinking, 'Can't you see he's an a**hole?'

Then, after quipping that "70-year-old men don't get less cranky or racist as time goes by," Stewart urged the media to "take up a hobby," adding, "I recommend journalism" (zing!).

Of course, it's pretty clear that Trump's outrageous and unpredictable style is throwing a lot of people off their game. I mean, what exactly is the best way to cover a president who shares some of his most important messages via his personal Twitter account? But Stewart definitely has a point. If the President of the United States has no problem whatsoever with unapologetically censoring members of the news media because he doesn't like what they're writing, that's a huge threat to democracy. And it might take a fight to overcome it.