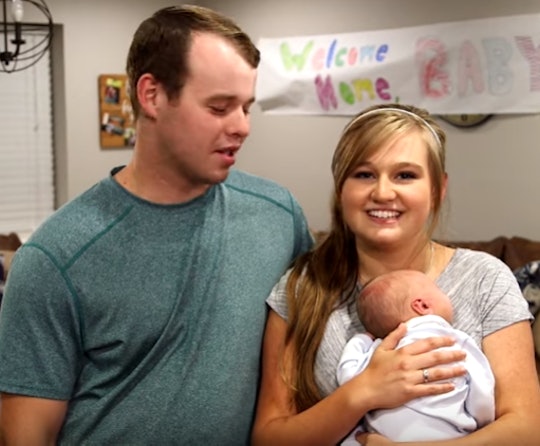 The ever-expanding Duggar is growing by one more. On Thursday, Counting On stars Joseph and Kendra Duggar announced they're expecting another baby, which means their son, little Garrett David, is going to be a big brother soon enough.

As I'm sure their fans well remember, Joseph and Kendra Duggar were married in September 2017, after getting engaged at his sister Joy-Anna Duggar's wedding to Austin Forsyth, according to People. And just as it happened with the two weddings following in close succession so it was with their pregnancies. Joy and Austin announced they had welcomed baby boy Gideon in February 2018 while Joseph and Kendra introduced little Garrett to the world in June 2018, according to E! News.

This time around, however, the seventh child of Jim Bob and Michelle Duggar and his wife flipped the script just slightly. On Thursday, Joseph and Kendra took to the family blog to announce they are expecting a second child, writing: "We are ready to double the fun at our house! Being parents has already proven to be a greater joy than we had hoped or imagined. We love getting to parent together and are loving every moment and milestone. We are very happy that our little family will welcome a new addition later this year. Children really are a blessing from God!"

The couple also shared a video announcement, complete with 10-month-old baby Garrett, where Kendra explained she was surprised and super emotional to find she was pregnant for the second time:

When I found out that I were expecting, at first I was really shocked and then I was super excited and then I just couldn’t believe it was really happening. It was so many emotions. We are so thrilled.

Joseph also admitted in the video that he was quite emotional with the news of the baby, as per E! News: "I was really excited, she really surprised me good this time. I'm not necessarily the emotional type, but I definitely am super thrilled that we're gonna be having another little one around the house."

While some critics might have their concerns about the couple getting pregnant for their second baby less than a year after welcoming their first, they might want to remember that Joseph Duggar knows a little something about having lots of kids around. And besides, how much fun will this new baby have not just with a big brother so close in age but plenty of cousins too?

Joseph's sister Jessa Seewald is expecting her third baby with husband Ben in about nine weeks or so, which means the cousins will be really close together.

It really shouldn't surprise anyone that the couple are expecting another baby so soon. After all, Kendra told Us Weekly in March 2018 that she and her new husband wanted a big family: "We would love to have more kids if the Lord blesses us. As many as He wants to give us, we’ll be happy to take them."

Now it seems they are well on their way to getting their wish.