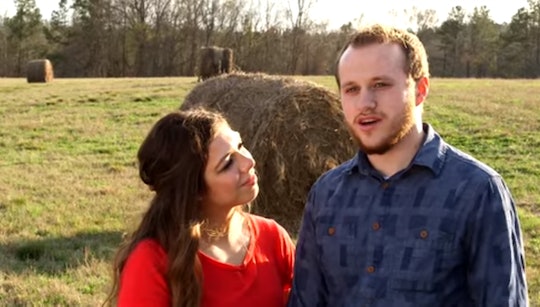 Josiah Duggar's Political Quotes Are Few & Far Between, But They Are Still Revealing

It seems fans of TLC's hit reality show Counting On can expect another wedding in the near future. Last month it was revealed that Josiah Duggar had become engaged to his 18-year-old girlfriend, Lauren Swanson, according to People. Of course, the news of his engagement has propelled Jim Bob Duggar's 21-year-old son into the spotlight, and fans are now more curious about his personal life and political beliefs. Although Josiah Duggar's political quotes are limited, they still reveal to which side of the ideological spectrum he swings.

Most, if not all, people familiar with the Duggars know that they are a strictly religious and staunchly conservative family. So it should be no surprise that the newly-engaged Duggar would express similarly traditionalist beliefs on his social media accounts. Most notably, Josiah Duggar shared an anti-abortion message on his Instagram account a few months ago that caused quite a stir, according to Inquisitr. Given the Duggar family's stance on abortion, his post admonishing abortion isn't surprising, nor is his position as an opponent of the safe and legal procedure.

Duggar wrote in the caption of his October post — which included a photo of him holding a sign that read "Abortion Kills Children" — "Standing with thousands of pro-life individuals throughout the country today in the #lifechain. Pray for people in crisis situations and pray for our nation!"

The anti-abortion post has also led Duggar fans and critics alike to surmise that Josiah Duggar is a Republican, although the 21-year-old son has never publicly stated the political party he belongs to. It wouldn't be a stretch to think that he aligns with the GOP, though: After all, the majority of people who ascribed to conservative principles also hold anti-choice beliefs. In fact, standing against abortion is one of the major tenets of the Republican Party. And GOP lawmakers are the ones leading the charge in restricting abortion and reproductive rights across the country.

Not only that, but his father, Jim Bob, had an active political career as a Republican in his home state of Arkansas before becoming a reality TV star. It's not to say that kids will believe what their parents believe — a 2014 study found that children raised with strong political beliefs, whether liberal or conservative, are more likely to rebel as they get older, according to The Atlantic. But that's highly unlikely in Josiah Duggar's case, at least right now, given the evidence on his social media accounts.

His anti-abortion message isn't the only clue as to what his political beliefs may be. On May 5, 2015, Josiah Duggar shared a photo to Instagram of himself and his family standing alongside former Republican Gov. Mike Huckabee of Arkansas — the same day, according to CNN, that Huckabee announced his presidential bid, running on the Republican ticket. The caption to that post read,

(If I could digress for a second: Anyone else think that's an excess amount of hashtags for such a short caption?)

It should also be noted that the Duggar patriarch also stumped for Huckabee in the last presidential election, as well as in 2008, when the former Arkansas governor threw his hat in the ring vying for the Republican presidential nomination that year. The distance between the apple and the tree is usually not far.

Whether or not Josiah Duggar will share more of his political beliefs on social media remains to be seen. But it may be interesting for Counting On fans to watch how his viewpoints evolve now that he has been hoisted further into the spotlight — if they evolve at all.