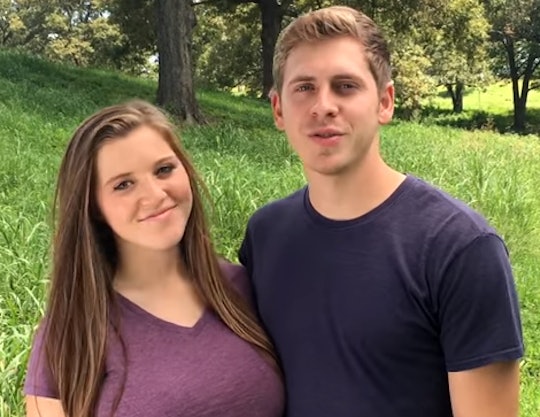 Ever since Joy-Anna and Austin Forsyth welcomed their baby boy Gideon in February, fans have been commenting on how much he looks like his dad. Which is sort of odd when you consider the fact that little babies so rarely look like adult humans. Generally speaking I find they need time to grow into their faces. This is apparently not the case with Gideon, and it seems his mom has decided to definitively chime in. Joy-Anna Duggar says Gideon and Austin are look-alikes in a new Instagram post, and fans can breathe a sigh of relief. Because they most definitely do look alike.

Gideon Forsyth was born on February 23 weighing a whopping 10 lbs., 3 oz. It was a pretty tough delivery for Joy-Anna, who had planned on giving birth to her baby boy at home like her sisters Jill and Jessa had done before her. Unfortunately, her midwife realized Gideon was in breech position (bum first rather than head first in the birth canal) after poor Joy-Anna had been in labor for a full 20 hours, according to People. She was moved to a nearby hospital in the Duggar family's hometown of Tontitown, Arkansas where she was able to give birth to Gideon safely. And since his arrival, it seems fans can't seem to stop talking about how much the little boy looks like his dad.

The first serious wave of Counting On fans who spotted a striking resemblance between Austin and Gideon started when Joy-Anna posted a picture of the baby boy in April. Perhaps it was the baby's cheeky little smile that sparked the comparison.

He has his Daddy's smile. So sweet. Thanks for sharing.

And this was just from people who h ad seen Austin Forsyth as an adult.

Apparently fans were hoping to get a bit more in depth with their comparisons, because Joy-Anna posted a baby picture of Austin after receiving loads of requests from followers.

Lots of y’all have been asking for baby pics of Austin...I’d say they look alike!☺️😘

So here is Austin Forsyth as a baby.

And here is baby Gideon Forsyth at five months.

So what did fans think once they had a side-by-side comparison to see if little Gideon looked as much like his dad as they initially suspected?

He Looks identical to his Poppa.he's Beautiful Joy you take great care of him.

I totally though this WAS Gideon and wondered why Joy dressed him in such heavy winter clothing in the middle of an August heat wave, lol

Perhaps happily for Joy, a few people conceded they could see a little of her in her baby as well. Which must feel nice for Joy-Anna, considering she did give birth to Gideon and everything.

Twins! But Gideon has a little Joy too!

Looking at their pics one after the other, I feel Gideon looks like a perfect blend of both of you.

I am terrible at this sort of guessing game and always have been, but even I have to admit that Austin and Gideon look almost eerily similar. Fortunately, Joy-Anna doesn't seem to mind her baby looking so much like her husband even the smallest little bit. She added the hashtags #papaandGideon #lookalikes #lovemymen to the pictures she posted. In other words, she loves seeing the similarity between the two as much as fans do, and that's pretty great.