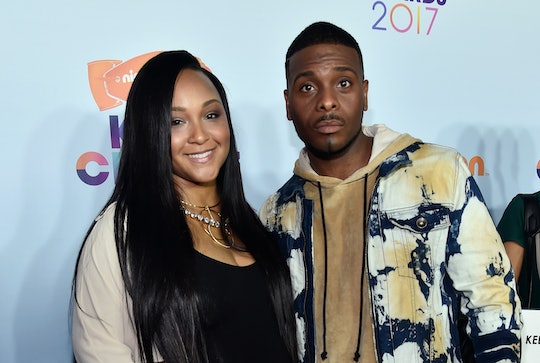 Attention, all Good Burger fans! Kel Mitchell and Asia Lee are having a baby, as you may know by now. And once again, fans have another reason to throw a Good Burger-themed celebration for the happy couple: Mitchell and Lee revealed their baby's sex in a sweet Instagram announcement on Monday — and it's a girl!

On her Instagram, Lee posted a video of the couple's baby gender reveal party. The video showed pink smoke pouring out of two canisters, while a crowd erupted into cheers and celebrations at the news. In the video's caption, Lee wrote,

Woooowww We are having a Girl! My wonderful hubby @iamkelmitchell and I can't wait to meet her!! We are beyooooonnnddd Happy & feeling blessed! Thank you to all the friends and family that came to celebrate with us on Saturday! You all are truly the best! Thank you Jesus for blessing us with a sweet baby girl. #genderrevealparty#mommydaughtertime#mommyslittlegirl #theMitchells#IlovemyHusband

Mitchell, most famous for making kids laugh on goofy Nickelodeon shows like All That and Kenan & Kel, married Lee, a designer and rapper, in 2012 after a long friendship. This will be the couple's first child together. Mitchell, age 38, has two other children from previous relationships.

The couple has been killing it at the big, important social media announcements lately. When they first announced the pregnancy back on Valentine's Day, they did so via a Good Burger-themed photo, wearing those famous employee hats while Mitchell held a cheeseburger and Lee held an orange soda. (Mitchell's character in Good Burger was an orange soda fanatic.)

In the caption, Mitchell wrote,

We have a bun in the oven! thank you @therealasialee for being the best Wife to me the best Friend to me and now the best Mom to our blessed baby!! I love you so much! #thankyouJesus🙏#Blessed#specialdelivery#myWiferocks❤️ photo credit: @ohmyjosephine

For many children of the '80s, '90s, and early 2000s, Mitchell's goodhearted but not-so-bright fast food employee was a childhood comedy staple. Mitchell and his partner, Saturday Night Live's Kenan Thompson, have brought the Good Burger dream team back together over the intervening years, most notably during a sketch on The Tonight Show With Jimmy Fallon in 2015 that showed that the audience was hungry for more Kenan and Kel antics.

When asked at the time if the duo had any plans to team up again, Mitchell said fans would "have to wait and see."

He'll likely have his hands full for the foreseeable future, but hey, maybe the next time the Good Burger team reunites, Mitchell can bring a very special, very small guest along.

Congrats to Mitchell and Lee!