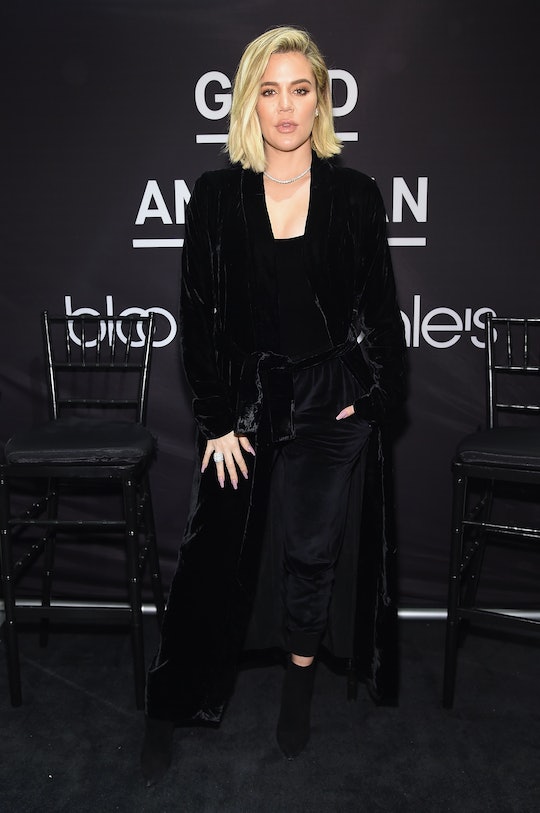 Khloé Gets Honest About Googling Photos Of Her Pre-Pregnancy Body, & It's So Refreshing

Being pregnant for the first time can be a pretty strange experience. You never really know how your body is going to react and change as your baby grows, and even if you're beyond thrilled to be expecting, it can still feel like a huge adjustment. So when mom-to-be Khloe Kardashian admitted to Googling photos of her pre-pregnancy body on Twitter Monday, according to Us Weekly, it seemed completely understandable. And although it's clear that the Keeping Up With The Kardashians star is so excited to be welcoming her first child in only a few months time, it's pretty refreshing that she's not afraid to admit that being pregnant isn't always the greatest thing ever.

Given that two of her sisters already have three children each, it's safe to say that Kardashian has had plenty of experience observing the ups and downs of pregnancy. But when asked by one of her Twitter followers Monday how she was enjoying being pregnant “on a scale from Kim to Kourtney,” Kardashian remained her usual level-headed self, and replied that she was somewhere in the middle — not as miserable as Kim was while she was pregnant, but not totally blissed-out about it like Kourtney seemed to be. And really, as much as the world may have freaked out over Kim's surrogacy news, or clamoring to get a shot of Kylie Jenner's rumored baby bump, Khloé just seems like a totally normal, happy pregnant woman — and her fans totally love her for it.

Although she remained tight-lipped for the first few months, Kardashian confirmed in December that she was expecting a baby with her NBA player boyfriend Tristan Thompson, and since then, she's been happy to share details about her pregnancy with her social media followers. In a series of tweets Monday, Kardashian opened up about her recent pregnancy cravings — she had a salad and three bowls of Froot Loops cereal for lunch, because, obviously — and then talked about searching for photos of herself online. Kardashian wrote, "Now I am googling images of my pre-pregnancy body and I'm feigning to get back to my workouts and old body," and while most pregnant woman likely won't be able to find pages and pages of gorgeous photos of themselves on Google Images the way Kardashian can, she definitely wouldn't be the first pregnant woman to scroll back through her old Facebook vacation photos and think, "I wonder if I'll ever look like that again?"

One big difference between the reality mom-to-be and the rest of us though? Kardashian's commitment to maintaining her exercise routine during her pregnancy. It's true of course, that many moms do have incredibly active pregnancies (in April 2017, Canadian Julie McGivery even ran the Boston Marathon at eight months pregnant, according to The Huffington Post), but many also find gestating a human to be exhausting and physically demanding enough (especially if they've suffered from particularly bad morning sickness, ugh).

So far Kardashian seems to be handling the transition to pregnancy pretty well, and shortly after making her pregnancy announcement public, she returned to sharing her regular Snapchat workout posts, according to E! News, even sharing her favorite pregnancy workout moves on her website and app earlier this month.

But unlike some celebrity mamas, who make it seem like staying super fit and energized and happy while pregnant is the easiest thing in the world, Kardashian shared that — like pretty much everything else about her pregnancy — she was trying to keep her expectations realistic. She wrote,

I'm so lucky that I've been able to stay active during my pregnancy. If I'm not doing something, I just feel off, ya know? I can't beast out in the gym the way I could six months ago—and, let's get real, it'll be a few more months before I can again—but I'm definitely doing what I can.

The Kim/Khloé/Kylie Kardashian-Jenner baby boom has definitely been a huge deal on social media over the past few months, yet Khloé has somehow seemed to manage to stay totally chill and take it all in stride. And honestly, as someone who could easily choose to share only the parts of her pregnancy that are perfectly joyful moments of sunshine and rainbows, it's pretty cool that she hasn't at all been afraid to be honest about what it's really like.