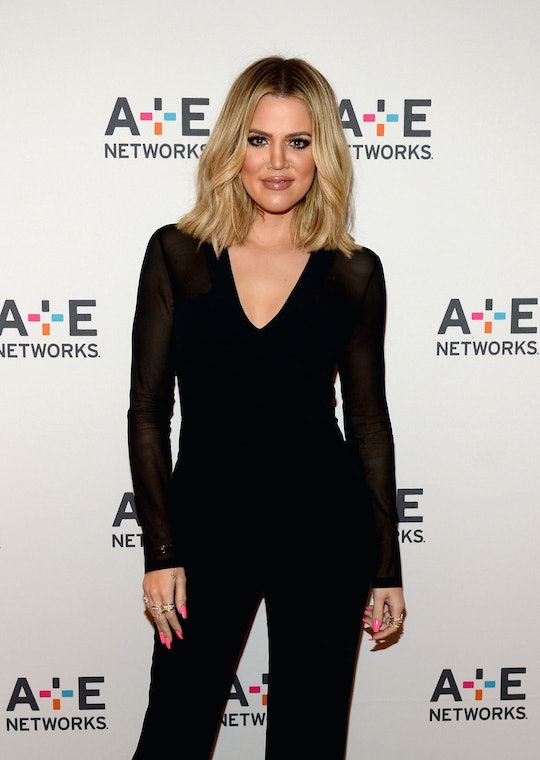 The third trimester of pregnancy can be challenging since both mom and baby are going through lots of changes. As they near the end of pregnancy, a lot is going on inside of mama's tummy — and it takes its toll. Even celebs are subject to the trials and tribulations of those last couple of months. In fact, Khloe Kardashian is "exhausted" at seven months pregnant, and she understandably wants the paparazzi to lay off of her while she travels. Considering how much she and her body are going through, it's no wonder that she doesn't want cameras flashing in her face and photographers chasing her down.

Kardashian is due some time in April, which puts her in her third trimester. She has reportedly been traveling back and forth between Los Angeles and Cleveland to be with her boyfriend, NBA player Tristan Thompson, who plays for the Cavaliers. She also plans to give birth in Cleveland, according to E! News.

On Sunday, the mom-to-be tweeted an appeal for empathy to the media, saying:

Really wish paparazzi would understand how hard flying is on my body right now. It’s the only time I feel incredibly exhausted, swollen and nauseous. Screaming rude things and taking my picture when I already feel like crap I can really do without. At least be quite if you must.

While she admitted that it is unlikely that the photographers will back off, she explained in another tweet that her pregnancy should be taken into consideration:

I love you guys! I know it comes with the territory and I hate when people complain about stuff like that. But while I’m pregnant I would love some boundaries with the paparazzi. I know it won’t happen but here’s to putting it in the universe.

Complications and extenuating circumstances aside, it is generally safe to travel throughout pregnancy, according to the American College of Obstetricians and Gynecologists (ACOG), though many women prefer to travel during their second trimester and take advantage of that lovely energy boost. Additionally, according to the ACOG, many airlines allow for air travel through your eighth month (up to 36 weeks), but it's best to check with the airline ahead of time. Kardashian's long distance relationship requires her to travel more often than most, meaning that she is suffering through some pretty rough symptoms while en route.

The kind of exhaustion, swelling, and nausea that Kardashian described is pretty par for the course during the third trimester, according to Parents. The extra effort caused by added weight to a pregnant woman's body, along with trouble sleeping, makes for some seriously groggy days. Edema is the technical name for swollen feet, ankles and legs and is caused by fluid retention in the lower half of the body. The general edema, along with the added swelling to extremities during flight, is enough to make anyone cranky. And while morning sickness has usually cleared up by the third trimester, nearly half of all expectant mothers experience heartburn and it is very common towards the end of pregnancy.

Along with the symptoms that Kardashian mentioned in her tweet, the third trimester comes with a few more "fun" experiences for expectant mothers, including the mother of all back pain. This pain is caused by the damage a growing belly does to your posture, as well as the hormone relaxin that loosens joints in preparation for delivery, according to Parents. Lower back pain can make it hard to sleep, adding to the exhaustion.

Many women also experience pre-contractions, or Braxton-Hicks contractions during the eighth or ninth month. Kardashian likely isn't there yet, meaning that she may have even more discomfort to look forward to.

Ultimately, the fact that Kardashian has to ask for respect from the media during one of the the most personal and trying times of her life is disheartening to say the least. Hopefully the paparazzi takes the hint and stops "screaming rude things" at her and lets her enjoy these last few months of pregnancy — even if her celebrity status comes with the territory.