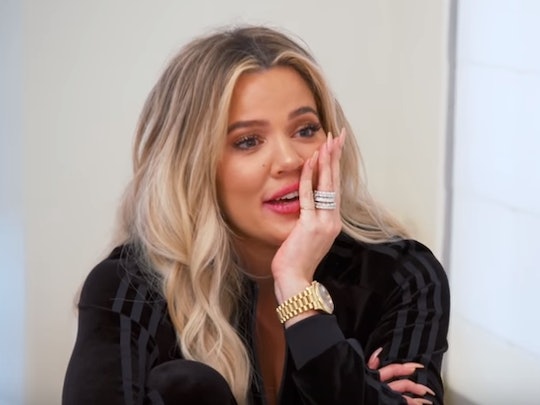 Khloé Kardashian gave birth to her daughter True in April. Just to be clear, she had her first baby less than four months ago after having some worries that she might struggle with infertility, as documented on Keeping Up With The Kardashians. And yet, people are already asking her whether or not she wants to have another baby. Like this is information they are entitled to have, which I guess is something the Good American designer is probably accustomed to as a Kardashian. But here's the thing about Khloé: she knows how to deliver a great response. In fact, Khloé's answer to whether she wants more kids deserves a sweet little chef kiss, because it's so perfect. I mean, I doubt it will end the frequent questioning, but at least I got a good laugh out of it.

During a recent interview with E! News, the Keeping Up With The Kardashians star was asked if she wanted more children after welcoming baby True with boyfriend Tristan Thompson on April 12. To play a little Devil's Advocate here, I suppose I understand why she gets asked this question. Khloé is from a famously big family of six siblings who remain close knit to this day.

They are so close, in fact, that she and Tristan recently moved back to Los Angeles from Cleveland so that she could be near her family. Perhaps especially because her sisters Kim Kardashian-West and Kylie Jenner both have baby girls close in age to little True; Kim's daughter Chicago West was born on Jan. 15 and Kylie's daughter Stormi Webster was born on Feb. 1.

Now as far as I'm concerned, True's cousins are basically like siblings for the little girl that Khloé doesn't have to worry about raising. So she should be all good. But fans have been asking her on social media about whether or not she wants more babies for some time now... because I guess having a 3-month-old baby is sort of old news?

Fortunately the Revenge Body host tends to take the rather invasive line of questioning in stride.

When she was recently interviewed by E! News, however, she went even further into her reasons why she might not be quite ready to give birth... her uterus needs a hot minute to get back to normal size, guys.

"Let my uterus shrink down again! I honestly think I would love to have more kids, but I think I just don't know if I'm ready to get pregnant again, it's a lot!" Khloé told the news outlet.

So here's the good news for fans who can't seem to get enough of those little Kardashian babies; when she is done shrinking her uterus back down to size, Khloé told E! News she definitely would love more kids. She's even giving us a bit of a timeline. "But I definitely want more kids, I just don't know when that is gonna be," she told E! News. "I heard that you should wait at least a year."

There's also this: Khloé tweeted a photo of herself during a Calvin Klein photo shoot while she was pregnant on Wednesday and admitted that she misses her "pregnant tummy."

Khloé Kardashian knows better than most how to share her life with her followers. This is how she has made her living for the past 10 years, after all. So I doubt she's terribly surprised that people feel as comfortable as they do prying into her life and asking her deeply personal questions about whether or not she wants another baby. But she handled it like a pro, and gave us less professional moms out there a great response to use on the regular. Just give my uterus a chance to shrink back to normal, why don't you?