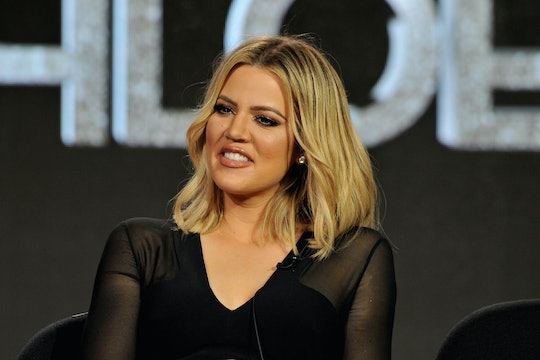 Khloé K. Shared A List Of Traits She Hopes Her Daughter Inherits From Her & It's A Must-Read

It's nearly go-time for Khloé Kardashian and her boyfriend Tristan Thompson. The expectant parents are mere days away from welcoming their first child together, and it looks like them impending birth is bringing out the reflective side of the Good American jean designer. According to her personal app, she's taking stock of a few things in preparation for her daughter's arrival. Thinking about her future, about her family, about the things she would like to pass down to her little girl, and if you read Khloe Kardashian's list of traits she hopes her daughter inherits, it's sort of empowering.

The 33-year-old expectant mama is now firmly ensconced in Cleveland, where she lives with her NBA player boyfriend Thompson, waiting on her little girl. Khloé is planning on flying her Los Angeles-area doctor into Cleveland for the birth, and other members of the Kardashian/Jenner clan (including mom Kris Jenner) are expecting to be at the birth as well, a source told People. She even missed a big family Easter celebration in Los Angeles, although she was chatting with her sisters and her mom on FaceTime during the day, as People reported.

Sure, she might be missing a thing or two in Los Angeles with her famous family, but it's all to the greater good: to bring her baby girl into the world.

Now that she's in Cleveland and away from her busy work life in Los Angeles, the Revenge Body star has been taking to her app to share her hopes and dreams for her daughter. Last week she was more focused on traits she hoped her daughter would inherit from Thompson, like good dance moves, "TT's IQ and street smarts," and his good looks. She also noted that she would like her baby to inherit her mom's work ethic, which makes sense since Kris Jenner is arguably the hardest working woman around.

I can’t wait to meet my baby girl! I often think about what she'll look like and what her little personality will be like. She’ll be the perfect mix of me and Tristan — which is such a crazy thought, LOL.

This week, however, Khloé got a bit more in depth about what she would like her daughter to inherit from her, specifically. She hopes her daughter will have a sense of humor like hers, and take after her in the "business savvy," "taste in music," and "selfie-taking skills," as the Daily Mail reported. I can't imagine too many people would argue about that one; the Kardashians all but invented the selfie.

She also hopes her daughter inherits her butt, she wrote on her app, according to the Daily Mail. Something else the Kardashians might have reinvented, if you think about it.

While some people might see this list of traits Khloé hopes her daughter inherits from her as vanity, it actually speaks to something deeper. It's proof that she is happy with herself, so happy, in fact, that she can actually recognize her strengths and can hope to pass them on to her baby. Which is something I think every mother out there should do, both for themselves and for their child.

Come up with a list of traits you genuinely like about yourself, silly or serious or somewhere in between. Your smile, your hands, your empathy, your great taste in romantic comedies. Whatever it might be. And look at this as a series of gifts you can give your little one.

Take a little advice from Khloé Kardashian. Love yourself enough to know you have so many great things to pass on to your baby.

More Like This
Penelope Disick Transforms Brother Reign Into An Adorable Minion
Olivia Newton-John's Daughter Says Her Mom Was Her "Safe Place" In Lovely Tribute
Twitter Is Applauding Jennette McCurdy For Speaking Out About Toxic Mom In Memoir
Mindy Kaling Has The Chillest Response To Rumors That B.J. Novak Is Her Kids' Father