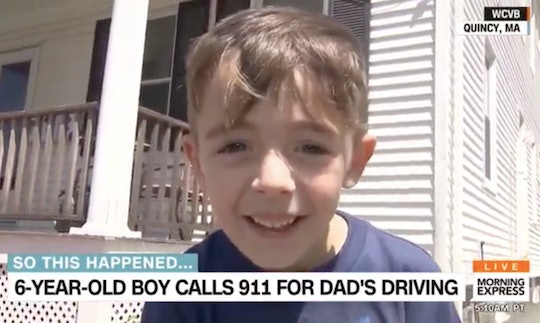 Kid Calls 911 After Dad Runs A Red Light, Because He's Clearly Listening To His Parents

You really just never realize how close your kids are watching you until it's way too late. It's like having a tiny spy follow you around who you have to feed and clothe and be nice to 24 hours a day, seven days a week. What a gig. One little boy in the Boston area took his spy game to the next level on Wednesday. This wily kid called 911 after his dad ran a red light, proving you can't get away with anything once you're a parent. Also your kids will apparently rat you out in a heartbeat, so be ready.

More Like This
Apple Card Family: How It Works & What Your Kids Can Learn
Attorneys General In Nearly Every State Oppose Facebook’s “Instagram For Kids” Plan
Peloton Recalls Treadmills After Child’s Death & Injuries
Vaccinated People Can Ditch Masks. Where Does That Leave Kids?

Six-year-old Robbie Richardson was out driving around town with his dad Michael when he noticed something. His dad turned right on a red light. Robbie is no fool, guys. He knew red meant stop. While his dad tried to explain to him that a right- hand turn on a red light was perfectly legal, Robbie wasn't buying it. So he did what any good citizen would do — he sold his own father down the river to the authorities. Robbie called the Quincy area dispatch to report that "Daddy went past the red light. He has a black truck. He was in the brand new car, mommy's car."

According to Robbie, his daddy had to go to the car wash and he ran a red light. Robbie was just as concerned about what he felt was his father's flagrant disregard of the rules. "Everyone follows the rules, but not my daddy."

(I would like to take a moment to point out Exhibit A below, where Robbie is clearly handling a vehicle without a seatbelt. Just sayin', nobody's perfect, kid.)

Mike Richardson was eventually summoned to the phone by the dispatcher and an imperious young Robbie. Richardson laughingly apologized, and the dispatcher let him go. Poor Robbie must have been horrified. He takes a leap of faith and reports his father's crime, only to be laughed off? How humiliating.

Luckily for Robbie, the audio of his 911 call is having a moment on the internet since the Quincy police station shared it on their Facebook page with this caption:

Every day we answer numerous 911 calls. Often times, these calls are from individuals who are in need of immediate assistance. Sometimes, it’s a simple misdial. Then there’s Robert’s 9-1-1 call.

Robbie can enjoy a little fame, and get patted on the back for a job well done. Although I pity his father for the next few weeks — that kid is going to be watching him like a hawk for petty infractions, I can feel it.