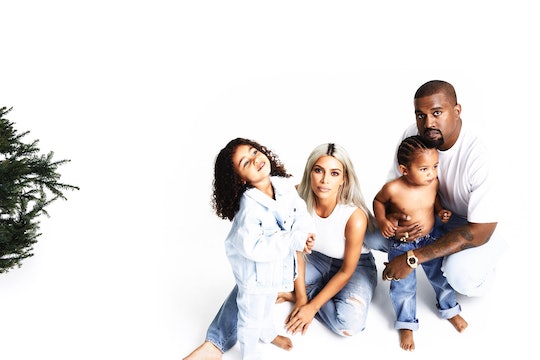 Kim Kardashian Debunks This One Christmas Card Theory, But Fans Still Have Questions

Alright, dolls, I have some bad news for you. Kim Kardashian has debunked this one Christmas card theory, which means we have all wasted an inordinate amount of time this holiday season. Well, maybe, since we all know the Kardashian and Jenner family can be cryptic AF when it comes to their personal lives.

Just in case you've had better things to do all month than update the KarJenner Instagram timelines every five minutes to check for pregnancy updates or some big reveal, let me fill you in on this Christmas "card."

Every year, the whole family gets together and poses for a glamorous Christmas card, just like so many families do all over the country. This year, instead of just gathering around the fire place in ugly sweaters with their family dogs, the family did an elaborate shoot with photographer and director Eli Russell Linnetz, who has been working with Kim's husband Kanye West for some time, which explains the super modern, artistic look of these images. (Linnetz was the guy behind the "Fade" video with Teyana Taylor, for example.)

The pics — dubbed the "25 Days of Christmas" — have been released day by day, so at this point, there's only one left, depending on when you read this. The way the shots are framed, combined with the slow drip of their release, has led some people (raises hand) to believe that the final one will have the entire family together, featuring every image, and maybe even a confirmation of some rumors surrounding the fam, since there are some gaping omissions so far.

Kim tweeted on Friday that we're all missing the point of these pics. These separate images aren't leading up to some Big Reveal. She retweeted a Daily Mail article calling the pics "teasers." Kim wrote, "These aren’t teasers these are the cards." Plain and simple, right? It makes sense if you think logically, which is hard to do when you're waiting for Kylie Jenner to confirm her long-rumored pregnancy, we know.

Her Christmas Eve "card" actually makes so much sense. Back in November, she told James Corden on the Late Late Show that this year's card was "just women and children," and the next-to-last picture reflects that.

With the white background and the cut off faces and body parts in the other images, it does have the look and feel of some big puzzle. But there were already too many little side groups for that to make sense after just a few days, so the pictures are just really great pictures of the family, and nothing more.

You'll notice that Dream has a starring role in the other cards, but there's no Rob. Kendall, the family's busiest member, appeared just once alone, and once with the rest of the women on Christmas Eve. While Reign, Mason, and Penelope appear in multiple shots, their dad, Scott Disick is absent. However, Kanye and Grandma M.J. both make cameos, which isn't random, but it does beg the question:

Where the heck is Kylie?

We're all going to have to come to terms with the fact that maybe Kylie was busy the day of the shoot and didn't make it. Or, like Kendall, she's only in one or two shots and Kim is saving it for last because she knows we're all waiting to see a pregnancy bump on her. (Which, by the way, is very unlikely since the photo shoot took place months ago when it would be too early for a sign of any noticeable bump, according to unnamed sources' timelines.)

People Are Not Happy About This

I know, that's not what any of us wants to hear. But it's not one big "card" or PR ploy to announce an alleged pregnancy. It's pics of a huge, messy family looking great in denim and white T-shirts on a soundstage.

Maybe on the last day, Kylie will show up, with Rob, Blac Chyna, and Travis Scott in tow. But at this point? It looks like we're more likely to get a picture of Todd Kraines than Kylie's alleged bump, sorry to break it to you.

Let's all hope for a Christmas miracle.