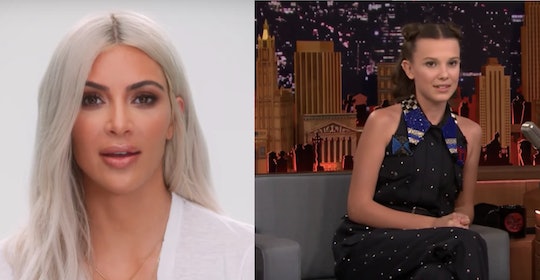 Let's get real: Most of us probably have some sort of celebrity crush/obsession going on — even if we're not willing to admit it. I'm madly in love with Ansel Elgort, for example. And I love watching anything with Shailene Woodley in it. (Bonus: They appear in several movies together!) Honestly, I would probably be star-struck upon meeting literally any celebrity. But if I met either of these two actors in real life, I'd probably faint. Done. It's weird to think about, but I guess even celebrities are super fans of other celebrities. Like the Kardashian sisters and Stranger Things star, Millie Bobby Brown. Kim Kardashian and Millie Bobby Brown finally met face-to-face, and they clearly loved every second.

Judging by both of their Instagram accounts, Kim Kardashian, 37, and Brown, 14, couldn't handle the fact that they finally met each other in person, People reported. “You guys, look who I’m hanging out with on this Good Friday,” the Keeping Up with the Kardashians star said in a video in her Instagram Story. Brown can be seen in the background waving, and exclaiming, "Hiiii!" They have exactly zero chill, and it's awesome. Brown also shared the same video clip in her Instagram Story on Friday. Additionally, she posted a selfie with Kardashian — with the duo sporting puppy ears, “Happy friday!” Brown captioned the shot.

As odd as this friendship seems — Kardashian is 37 an Brown is 14, after all — the history behind their mutual love is actually pretty sweet. Because it seems this in-person meeting has been months in the making, as Us Weekly reported. Back in November, Khloé Kardashian tweeted that she and her boyfriend, Tristan Thompson, “became obsessed with Stranger Things last night!!!" Then, during an appearance on The Tonight Show Starring Jimmy Fallon literally hours later, Brown revealed that she was a huge fan of Keeping Up with the Kardashians.

While chatting with Fallon about shows they've becomed obsessed with, Brown made her confession. "It's Keeping Up with the Kardashians all the way," she said, laughing. "I love them. I love them! ... I mean, I'm obsessed with them. I follow them on social media. I think that they are just, like, really great. They’re so entertaining!” Brown continued:

Khloé Kardashian obviously caught wind of the shout-out because the next day, she shared the Jimmy Kimmel clip on Twitter, writing, "It's a mutual love fest!! ILOVE you @milliebbrown! #Okurrrrttt this video made me smile from ear to ear BIBLE." Kim K also tweeted, "OMG @milliebbrown we love you bible!!!!" according to E! Online. The Kar-Jenner matriarch Kris Jenner even joined in on the love fest, according to Us Weekly. “I love you @milliebbrown, you are so adorable! Thanks for watching #KUWTK! We are huge fans of yours also!!”

And in February, Kim Kardashian sent Brown samples of her new fragrance line ahead of Valentine's Day, Mashable reported. Of course, the Stranger Things actress took to Twitter to express her excitement and gratitude for the thoughtful gesture. "Thank you #KimKardashian for my amazing gifts! You’re the best. My Valentines Day came early."

Later in February, Brown responded to a "Which sister are you?" quiz that Kim Kardashian posted on Twitter. "Guys. come on now... I feel like I’m all of you guys honestly!" Brown responded.

As a fan of both Millie Bobby Brown and the Kardashians, I love that Kim K and Brown were finally able to meet in person. Sure, they probably have nothing in common — aside from the fact that they've both done (decidedly different) campaigns with Calvin Klein. But that's what makes it so darn fascinating and adorable.

Not to mention, it's cool to see that celebs fan-girl, too. Celebs: They really are just like us!