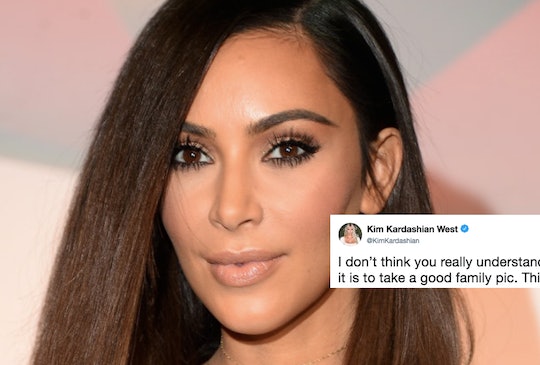 Kim K. Documented The Makings Of A "Good" Family Photo, & The Details Are Painfully Real

Kim Kardashian is the queen of the selfie. She's made an entire career out of taking pictures of herself, so you wouldn't expect that Kim Kardashian's "good' family photo was so hard to come by. And yet — it was, at least according to her captions on social media accompanying the stunning picture of the family of five. They might actually have a bunch of pictures of all of them together that the pubic never gets to see. But this shot is one of the only ones out there for the public with both Kim, Kanye West, and all three of their children. North flinging a peace sign and stepping on her mom's toes, Saint looking all grown up, and baby Chicago sleeping in Kim's arms.

Not one of them is smiling, which some people are noticing on social media. But those haters are obviously not getting her message. Family pictures are hard to get. They're also almost never fun, especially with a 5-year-old, a 2-year-old, and a newborn in tow. Kim captioned the picture, "I don’t think you really understand how hard it is to take a good family pic. This was all we got before all three kids started crying. I think I cried too."

She added in a subsequent tweet, "One hand holding the baby and the other hand grabbing the back of Saints shirt because he kept running away lol." When you zoom in on little Saint, you can see he's got big plans in the backyard to tend to.

It Looks Like Kanye Has North Locked Down, Too

Saint and his dad are matching a little bit, but the picture doesn't seem totally planned. It looks like any other family photo where you might get a little too excited to have all the kids around and decide that it would be "cute" to snap a photo of everyone. As if it were ever that easy. Judging from North and Saint's outfits, this picture was taken on Easter Sunday and just posted now.

On social media, a lot of fans feel Kim's pain. It's nice to know that celebs have the same problems the rest of parents do.

Some Spotted North Standing On Her Mom

It's pics and captions like this one that are good reminders that the Kardashians are just human beings at the end of the day. Even if they seem totally out there sometimes. But they're not really "regular," of course. They've been on television for over a decade and run million dollar companies, which is why their daily routines aren't always so relatable.

Sources close to the family told E! News this week that Kim really tries to "have it all," when it comes to working and being present for her kids. The sources said that Kim's schedule is "unpredictable" but that she tries to make sure she has breakfast with the kids before getting in a workout with her trainer, according to E! News.

Then, the reality star is "in and out all day long either filming or taking meetings," according to the news outlet. The source added, according to E! News, "She's lucky that even though she works a lot, she's not in an office from 9 a.m. to 5 p.m. and can find time during the day to spend time with the kids." Then, they hang out with their cousins. The source added:

The kids are always playing with their cousins and going back and forth to Kourtney's house. If Kim and Kourtney are working, their nannies coordinate so the kids can get together. They do a lot of fun activities and are always up to something. The older kids have also been involved with filming for the show recently so Kim spends time with them on set as well.

So their lives are charmed, but those three are still just regular kids who hate having their picture taken and don't mind stepping on their mom's perfectly pedicured toes. Fame can't tame toddlers, apparently.