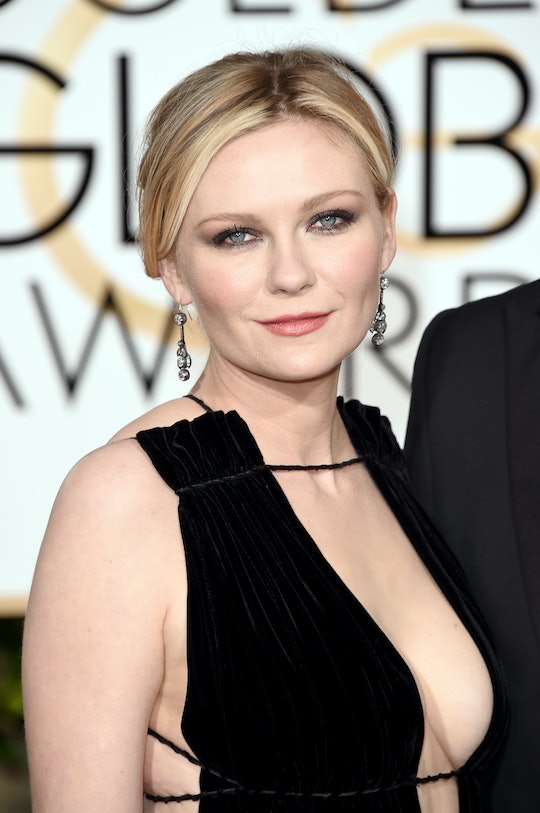 Award season is officially upon us, and along with it, some of our most beloved and familiar faces. Shortly after scoring the nomination for Best Performance By An Actress In A Miniseries Or Motion Picture Made For Television, I had only own question: What will Kirsten Dunst wear on the 2016 Golden Globes red carpet? Dunst earned the best performance nomination for her role in FX's standout Fargo. Her role on the miniseries playing Peggy Blumquist also marked her return to primetime TV. On Sunday night's red carpet, Dunst reminded us all how wonderful it is to see her back in the award season circuit. The last time Dunst was nominated for a Golden Globe was back in 1995 for the film Interview With The Vampire: The Vampire Chronicles. A take home at this year's show would mark her first Globe.

Dunst is up against four other impeccably talented actresses: Lady Gaga, who's nominated for American Horror Story: Hotel; Sarah Hay, nominated for her role in Flesh & Bone; Felicity Huffman, who's nominated for American Crime; and Queen Latifah, who was nominated for her performance in Bessie. Aside from the nom and her flawless acting chops, Dunst has always been an exciting red carpet arrival to watch. Her quirky, ethereal style has always showcased her willingness to depart from the play-it-safe style norm and to don frocks and silhouetted ballgowns that show off her personality and effortlessly chic sense of style. Dunst has been known to pull of a stunning, figure-hugging gown at one show and a jaw-dropping menswear-inspired look at the next. Her sense of whimsy and fun when it comes to her fashion choices has always served as inspiration for thousands of adoring fans.

As if it couldn't get any better, Dunst's stylish outfit choices have nearly always been eclipsed by her ever-changing hairstyles. She can pull of a top knot, Grecian waves, a sleek blowout, bangs, a lob/bob, beachy waves, and an up-do with the ease of a skilled red-carpet vet. It's no surprise this year her look was, yet again, totally unique and totally Kirsten.

She showed to the 2016 show wearing a jet black revealing frock that was as figure-hugging as it was draw-dropping. Though her look totally split the fashion critics — some immediately called it a miss and others didn't exactly know what to make of it at first sight — there's no denying that Dunst's fashion choice revealed her willingness to take risks on the red carpet. No matter your feelings, you've got to give her credit. Fashion is totally subjective, and Dunst continually brings it.

Here's a preview of her look:

And another close-up just because: