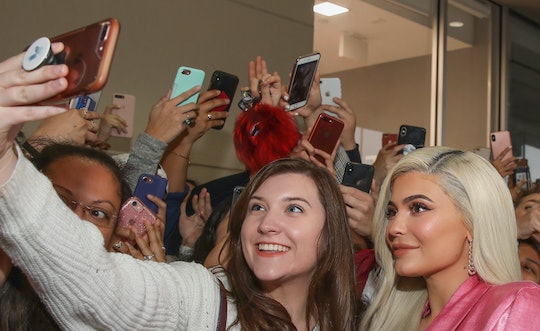 Friends, Cyber Monday is already almost halfway over, and the tick of the savings clock seems to be getting louder by the second. There are only hours left of discount holiday shopping, so personally, I'm stressed trying to figure out which sales I should be most focused on. I woke up to over thirty emails about different sales happening today, literally. So when I logged onto Instagram for some retail procrastination and discovered that Kylie Cosmetics' Cyber Monday 2018 sale includes 30 percent off everything, I took it as a sign.

That's right: Kylie Cosmetics is doing a site wide 30 percent off sale through 11:59 a.m. on Tuesday November 27, giving you another full day to take advantage of the beauty savings. Kylie Jenner herself announced the sale on her Instagram Sunday afternoon in an adorable video with her daughter Stormi, and I've been pretty hype since I saw it. Jenner has received backlash in the past because of overpriced Kylie Cosmetics products (remember that $360 brush set that came out last Christmas?), so fans of the brand will be pleased to see the makeup mogul leaning into lower prices instead of amping them up this holiday season. I'm a fan of Kylie's products, but it's hard to justify spending $30 on a lip kit when I could buy like 30 slices of pizza with the same money. $20 sounds much more manageable for some reason (and who really needs twenty slices of pizza?), so I might just have to splurge.

The sale is also a big deal because it's Jenner's largest ever. Her discounts typically only apply to certain products, like 40 percent off eye palettes alone or whatever, which is still exciting but obviously not as helpful as a sale on the majority of the site. A flat discount for everything (excluding holiday kits and the newest lip collab with Kim) is pretty much unheard of in the three-year history of Kylie Cosmetics, so now would be a good time to refill your makeup bag if you're in need. P.s. can you believe the company's only been around since 2016? I truly can't remember what my Instagram feed looked like before it was filled with videos of Kylie showing me matte lipsticks on her hand. I was already pretty shook that she was on the Forbes Thirty Under Thirty list, but the short timeline under which she amassed her personal fortune makes Jenner even more impressive (though obviously calling her self-made is more than a stretch). Love her or hate her, you gotta admit Kylie's successful.

Before you get your shop on, let me be super clear about two exceptions to Jenner's Cyber Monday discounts. The sale doesn't apply to Jenner's holiday collection or the latest KKW X Kylie lip collection, which Jenner makes with sister Kim Kardashian. The lines are Jenner's newest so it makes sense she wouldn't put them on sale. Plus, there's always huge hysteria around Jenner's holiday collection — she made $19 million in one day when the 2016 version dropped, CNBC reported — and there's no way Kris Jenner, momager of the century, would approve of a move like that.