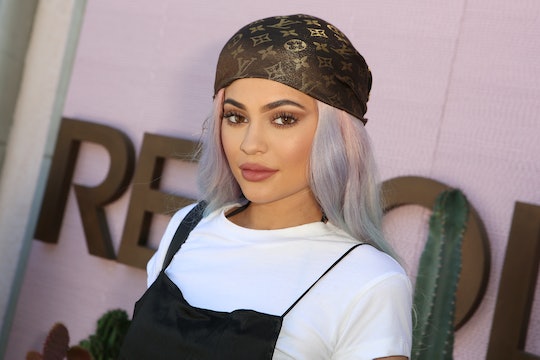 Kylie Jenner, 20, hasn't yet confirmed any of the rumors surrounding her reported pregnancy, but a source told E! Online that she is nervous to give birth. The source reportedly said that she has "everything ready to go" ahead of her early February due date and is now "counting down the days" until she finally delivers her newborn. Also, her sisters are "helping calm her fears and letting her know what to expect."

Sources have said that Kylie is expecting in February, according to Teen Vogue, ever since rumors started spreading in September that she was carrying a bun in the oven. But the reality star has largely kept out of the spotlight — with the exception of unveiling the KENDALL + KYLIE SS18 campaign for her and sister Kendall’s latest Forever Unique footwear collection and taking part in Calvin Klein's SS18 global campaign, both of which were reportedly shot before Kylie's reported pregnancy or at the very beginning of it when she wouldn't have had a bump, according to Cosmopolitan. She's also kept super mum on social media (after months of teasing fans about the rumors), leaving followers to guess about her whereabouts.

But the insider reportedly told E! Online that, while the Keeping up With the Kardashians star has been keeping quiet, momager Kris Jenner has been "getting everything set up" with the baby's nursery and the family is "all ready to meet the baby." Despite the nerves, Kylie is reportedly also "so excited to finally be a mom and have the baby in her arms."

Her sisters, according to E! Online, have been showing her the ways. Kim Kardashian recently welcomed her third child, which she announced on her app on Jan. 16. Kimye finally named their daughter Chicago, according to People, and they're already parents to North, 4, and Saint, 2. Khloé Kardashian is also expecting her first child with boyfriend Tristan Thompson, E! Online reported. And Kourtney Kardashian has three kids of her own, Mason, 8, Penelope, 5, and Reign, 3. So they all know a thing or two about childbirth.

After the baby arrives, Kylie plans to focus on a fitness and nutrition plan, the source reportedly told E! Online. "She is also very excited about losing baby weight and getting her body back," the source explained. "Once she gets settled at home with the baby, that's going to be a huge priority."

Some people have called Kylie out for hiding her reportedly pregnant body. One Twitter user wrote, "no wonder she's hiding she's not used to looking so big (the vanity)...well her butt and thighs anyway...the way she acts you'd think it was just weight gain not normal pregnancy bods."

I'm not sure why some of us are fat shaming, and I'm not sure why some of us care so much about Kylie not-so-shockingly wanting some privacy if she actually is pregnant. Pregnancy is a super intimate time for moms-to-be, but the comment about Kylie's "weight gain" and others like it came after TMZ shared a video Thursday Jan. 25 (which you can watch here) suggesting that Kylie still has a bump.

Some fans still don't believe the rumors, of course. And the video isn't the first to claim to show Kylie's baby bump (if it exists). There have been a few other claims that Kylie was trying to hide her baby bump in public, like at the annual Kar-Jenner Christmas party, according to Mirror.

Ultimately, the pregnancy is still questionable, but if the rumors that have been going around since September prove to be true, fans should be able to sleep again in a few weeks. The only fact is that she might be nervous already; let's let the woman live.