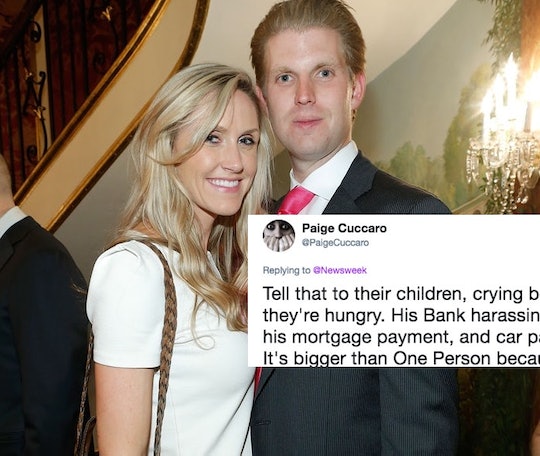 The government shutdown hasn't been easy on anyone. And with no immediate end in sight, it's getting increasingly frustrating for the many people, and their families, directly affected by it, especially when those close to President Donald Trump himself claim to understand the struggle. And recently, the POTUS' daughter-in-law Lara Trump said she knows "it's hard" for furloughed workers right now, but many people on Twitter have heavily disagreed that she actually does.

This has been the longest government shutdown in U.S. history, according to The Washington Post, revolving around Trump's request for funding for a border wall between the United States and Mexico. This shutdown, of course, has affected numerous government agencies, with some employees not being able to work at all and many being forced to work without pay, such as the TSA. Many are struggling to pay their bills, feed their families, and simply make ends meet without knowing when they'll be actually be paid.

But these workers do, seemingly, have sympathy of Lara Trump, who's married President Trump's son Eric and was one of his campaign advisors, according to Newsweek. Recently, she said during an appearance on BoldTV that she acknowledges the "sacrifices" furloughed employees have had to make during the shutdown.

"It's not fair to you, and we all get that. But, this is so much bigger than any one person," she told BoldTV. "It is a little bit of pain, but it's going to be for the future of our country and their children and their grandchildren. And generations after them. will thank them for their sacrifice right now." She continued:

I know it's hard, I know people have families, they have bills to pay, they have mortgages, they have rents that are due. But, the president is trying every single day to come up with a good solution here, and the reality is, it's been something that has gone on for too long.

"Please stay strong," she added. "We appreciate everything you're sacrificing, we are behind you, and we are gonna do everything we can — I know the president is doing everything he can — to resolve this quickly."

Lara went on to blame on the Democratic party in the video, saying that "they care so little about the people working in the government that they're not willing to negotiate at all" for the shutdown to end.

In the video, she expressed her sympathy for every single person impacted by the shutdown, but many people on Twitter felt that her comments were out of touch and were simplifying how much it's hurting those affected.

A representative for Lara Trump did not immediately return Romper's request for comment.

Lara's sympathy, while it hasn't gone unnoticed, isn't enough for the hundreds of thousands of people who aren't able to go into work, get paid, and lead their lives as they normally do.

Although President Trump stated on Sunday that he has provided Congress "with a path to end the government shutdown and solve the crisis on the Southern border," according to ABC News, it's likely that his proposal will fail in Congress later this week, as CNBC reported. This means that it's likely that it'll be even longer before these people will get paid or be able to return back to work.

It's important to remember that there about 800,000 employees who are unable to receive pay, with about 380,000 unable to work at all, according to The Washington Post. And, fortunately, there are people who have been very sympathetic to their situation and taken action to help. For instance, businesses all across the United States have come together to offer free meals to furloughed employees, recognizing how hard this shutdown is on them.

And although the POTUS' daughter-in-law probably hoped that her message would bring comfort to some during this tough time, her words and "out of touch" comments certainly aren't helping the workers affected by the government shutdown right now.