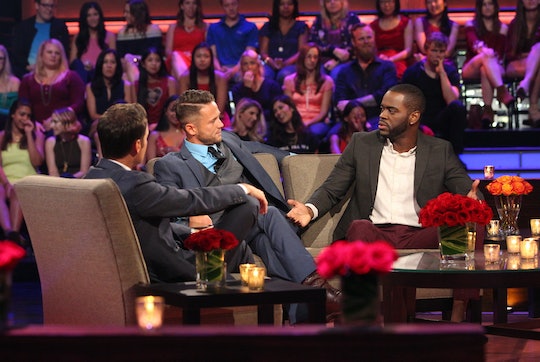 Lee's Tweets Need To Be Addressed On 'The Bachelorette: Men Tell All'

During Lee Garrett's time on Rachel Lindsay's season of The Bachelorette, a series of racist and sexist tweets were discovered on his Twitter account. Though the tweets were easy enough for a viewer to find, ABC allegedly had no knowledge of them, per Chris Harrison, but it left many wondering how Lee had ended up on the show in the first place. The news coincided with Lee's pointed harassment of fellow contestant Kenny King on the show, which drew attention to the way the series seemed to be using racism like it was just another method of creating drama. Lee's tweets need to be addressed on the Men Tell All special, because they weren't able to be discussed during the filming of The Bachelorette.

Twitter user emesola posted the compilation of Lee's tweets, which are unavailable now because his account can only be viewed by confirmed followers. Both Chris Harrison and Rachel confirmed that they had no idea about the tweets during filming, with Harrison dubbing them "very unfortunate." Rachel, however, has expressed a desire to confront Lee about the things he said. She told Entertainment Tonight that she felt differently about Lee since the show ended.

"I've read things, I've seen things that I didn't know about him before," Rachel said. "I don't have any questions. I just have something to say. [...] I don't know how I'm going to handle it. Maybe Lee has an apology. Who knows what he's going to bring to Men Tell All."

It seems certain that Lee will appear on Men Tell All and that his tweets will be brought up, either by Rachel herself or by Harrison. The alleged tweets, which are from 2015 and 2016, were wildly offensive. In one, Lee supported the "inhuman torture" of terrorists; in another he spoke about wanting Black Lives Matter to be recognized as a terrorist group. He expressed hatred for Islam and referred to Irish people as "the forgotten white slaves" (which is false). He seemed to suffer the misconception that reverse racism is a thing (it's not) by bringing up "minority privilege" and calling it racism.

His distaste for anything liberal was on full display, as well. He compared Hillary Clinton to both O.J. Simpson (specifically "the millennial's version of O.J.," whatever that means) and "a westernized Kim Jung Un." He made cracks about feminists not being pretty (because that's all women are here for, right?) and claimed being a meninist is his calling. He also dismissed President Obama's entire time in office by tweeting the following about Trump before the election: "This is the new Regan. Ladies and gentleman, 4 months to last til America has it's [sic] first president in 8 years!"

It's such a staggering amount of vitriol that to address all of it would probably take longer than the two hours available for the Men Tell All special. Lee has a lot to explain (including his treatment of Kenny), so he's going to have to be ready to own up to it all.