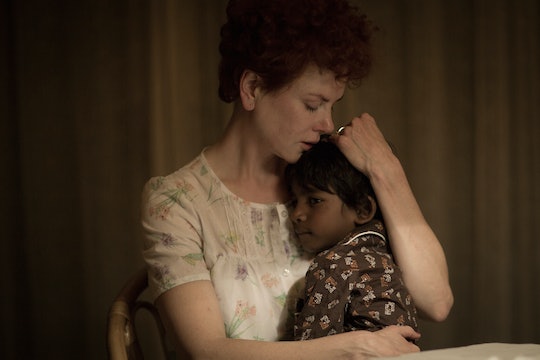 The Lesson Adoptive Parents Can Take From 'Lion'

By now, you've probably heard of Lion, the Oscar-nominated film based off the memoir A Long Way Home. (If you haven't, get thee to a movie theater ASAP.) The film follows Saroo Brierley's quest to find his birth family more than 20 years after being separated from them at a train station. It's exhilarating, eye-opening, and downright emotional. But it's not the only narrative. The film shines a light — albeit, a dimmer one — on Saroo's adoptive mother Sue Brierley and the duties that come with being an adoptive parent. Though the list is long, Sue believes it's the duty of adoptive parents to embrace their child's history and their subsequent decision to explore it.

"It is their right to search their identity, and it's a very natural thing," Sue tells Romper during a phone interview. "If you show fear, you’re virtually saying to your child that you feel inadequate to be their parent."

Although many adoptive parents are frightened by a child's decision to find their birth parents, Sue says that was never a thought that kept her up at night. What did scare her, however, was the thought that her son's search would lead to a dead end.

"I was really very happy to see that he found his first family," Sue says. "I just truly hoped for the best outcome. I would’ve been so sad for him if he got there and they weren’t living there anymore."

But — spoiler alert — the story of Saroo's search has a happy ending. Thanks to the then revolutionary technology of Google Earth and a handful of memories, Saroo was reunited with his mother, Kamla, his sister, Shekila, and his brother, Kallu in February 2012 — nearly 25 years after he went missing.

Unfortunately, the reunion was not without some sadness. Upon reuniting with his birth family — or first family, as Sue calls it — Saroo learned that his other brother, Guddu, had been hit by a train and died the night Saroo went missing. Despite the devastating news, however, Saroo's journey ended better than that of most people in his situation.

Encouraging an adopted child's search is only part of the adoptive parent's duty. Even if a child wants nothing to do with their biological family, it is crucial for adoptive parents to embrace the child's history. Especially in the case of interracial adoptions. In an interview with the Adoptive and Foster Family Coalition of New York (AFFCNY), Rebecca Leaming Hackworth, a director of social services for the adoption agency Dillon International Inc., emphasized the importance of adoptive families embracing a child's culture.

"Families that are Caucasian, and most adoptive parents are, who think racism is gone are quickly reminded that it is not as they walk through this experience with their children," she said. "Families that are successful will truly embrace that child's culture and grow in the knowledge of it."

And that's exactly what Sue and her husband John Brierley did. Having always wanted to adopt from India, the couple intensely researched the Indian culture before brining Saroo and, later their other adopted son, Mantosh, into their family. The couple decorated their home with an Indian aesthetic in mind, and hung maps of India in their sons' rooms to remind them of their homes. They regularly cooked Indian cuisine, and took the boys to see Hindi films. Basically, the boys were surrounded by reminders of their roots.

Unfortunately, they were also surrounded by racism. In his book, Saroo writes about his classmates referring to his as a "black b*stard" and parents telling teachers and coaches that they didn't want their son playing with the black boy. Of course, he wasn't the only target of cruel comments. Sue and John faced criticism from Indian families in their community of Hobart, Australia. The two often took their sons to the local Indian Cultural Center, in an effort to expose them to more Indian customs. Although the boys were welcomed with open arms, Sue and John were treated suspiciously or ignored altogether. After some time, they stopped attending events at the Indian Cultural Center and continued to bring the Indian culture into their home.

But they could only do so much to connect Saroo to his heritage. Since Saroo was separated from his family and brought in off the streets, he had no records to answer questions like "where was I born," what's my mother's name," or "when's my birthday." And, because he was only 5 years old when he got lost, his memories of childhood are fuzzy, at best, which is what made the reunion 20-something years later all the more magical.

But the journey didn't end with that one reunion. The next step for Saroo was to introduce his two mothers. Another scenario that many adoptive parents may find awkward and try to avid altogether. Sue, however, embraced the opportunity and saw it as an opportunity to ask the one question that had been running through her mind all these years — had Kamla always believed Saroo was alive. The answer, to Sue's relief, was yes.

"I would regularly send messages by the heavens to his mom to say, 'Your son is alive and well, and he’s beautiful,'" Sue says of her nighttime ritual. "I really hoped that the vibe and feeling would be going through the heavens and to her."

Even in this beautiful moment, however, a fear still lingered ever so slightly in the air. With tears streaming down her face, Sue worried that Kamla sensed her non-existent fear of losing the child she'd raised for more than 25 years. As the thought made it's way to the surface, Kamla began speaking to a the translator, who then told Sue something she needed to hear.

Kamla's words filled Sue with so much joy. But they weren't necessary, because Sue always had and always will see Saroo as her son. And by encouraging and embracing Saroo's decision to find his "first family", she only gave her son more people to be loved by and more people to love in return. And, ultimately, that's what being a parent — adoptive, biological, or otherwise — is all about.