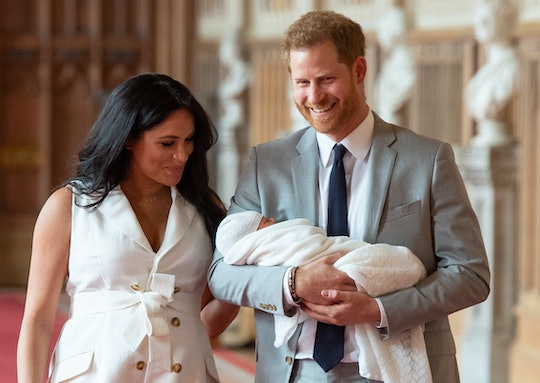 Mere months after walking away from their roles as senior royals, Meghan Markle and Prince Harry officially launched their website for Archewell, the couple's charitable organization. And naturally, the doting parents included their 17-month-old son Archie in their newest endeavor in a thoughtful, creative way.

On Wednesday, the website for the couple's much-anticipated non-profit Archewell went live after months of preparation. The name of the organization, as noted on the website, is based on two different meanings: "Arche" is the Greek word for "source of action" and "Well," which they describe as "a plentiful source or supply; a place we go to dig deep."

The couple have had this website in mind since "before SussexRoyal," as they said in a statement to The Telegraph in April, and they used Archewell as the foundation for naming their son when he was born on May 6, 2019. "We connected to this concept for the charitable organization we hoped to build one day, and it became the inspiration for our son's name," Markle and Prince Harry told the publication. "To do something of meaning, to do something that matters. Archewell is a name that combines an ancient word for strength and action, and another that evokes the deep resources we each must draw upon."

They also told The Telegraph that they "look forward to launching Archewell when the time is right." It seems the time is finally right.

After stepping down from their royal duties, the Duke and Duchess of Sussex have taken their time adjusting to their new lives. Moving first to the west coast of Canada and then California before eventually settling into their new home in Montecito this summer. Now that they are settled, both Markle and Prince Harry have begun to work more in the public eye with virtual interviews like their most recent TIME magazine's TIME100 Talk series, where they focused their attention on advocacy work in the digital world.

"Both of us realized that we can continue to champion these things that we’re passionate about. We can continue to do this work to try to affect change and help the people who need it most or the communities or environments that need it most, but it’s almost like you’re taking two steps forward and five steps backward if you can’t get to the root cause of the problem. Which at this point right now we see in a large way as a lot of what’s happening in the tech space," Markle shared during the TIME100 Talk series.

They also remain focused on their son Archie, of course, with Markle admitting in that same interview that they are "trying to embrace all of the quality time we get with our son right now, and to not miss a single moment of his growth and development which has been really special.”

Working on Archewell while raising their son Archie... it's the best of both worlds for Meghan Markle and Prince Harry. Not to mention little Archie.