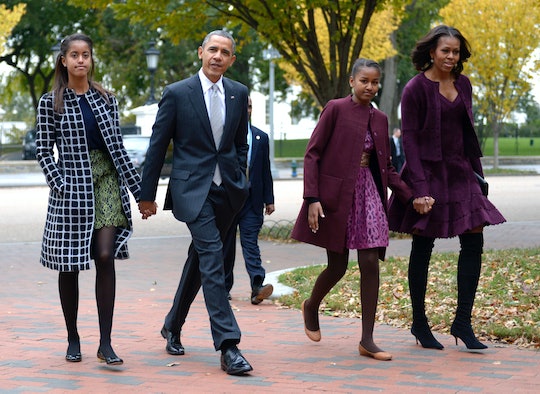 When I was little, I always wondered, 'What is it like to live in the White House as a kid?' As I've grown and had kids of my own, the question has altered, too. Now, I'm more curious about the parenting perspective. I'd imagine it would be incredibly convenient to have a chef on hand whenever you need one. And you'd never have to worry about your teenagers sneaking out in the middle of the night, that's for sure. Well recently, Michelle Obama opened up about what raising her daughters in the White House was like. And it's incredibly fascinating.

During the most recent episode of Conan O'Brien's podcast, Conan O'Brien Needs a Friend, the former FLOTUS opened up about her time in the White House as a mom. Malia Obama, 20, and Sasha Obama, 17, were only 10 and 7 at the time Barack Obama was inaugurated, according to Us Weekly.

"We had to parent by creating this cocoon of normalcy in a pretty crazy, abnormal world," Obama told O'Brien. "We spent eight years just going, 'It's OK! You'll be fine, this is normal, just go to school. You have men with guns... hey, you know, you're safe, don't complain! You have food, so don't complain to me.'" She continued:

In case you were wondering, Sasha and Malia had sleepovers with their friends while their father was serving as POTUS, just like any other kid would. And yes, that included having friends stay at the White House. It isn't clear whether the Obama girls had sleepovers at friends' houses — I'd imagine that would be a security nightmare. But they definitely wanted to, according to Obama. The Becoming author went on to tell O'Brien that she is "in awe" of her daughters for the way they've "managed this whole thing with poise and grace," adding that "there's a resilience that they've had to develop." She continued:

They've also had to sacrifice a lot of their childhoods, living in this glare and being the subject of some of this nastiness themselves and learning, at a very young age, how do you recover from that. They were the ones going out into the world every day, trying to be regular little girls.

This isn't the first time the former First Lady has opened up about what it's like raising children in the White House. During an appearance on the TODAY show back in November, she echoed the same sentiments about some of the drawbacks to being a First Daughter. “You want your kids to grow up normal. You want them to be able to have wonderful experiences privately. And you want them to be able to fail and stumble privately, like any other kids,” Obama said, according to Us Weekly. “When they’re not allowed to do that, it’s unfair and you feel guilty about it. Because they didn’t choose this life.”

As Cheat Sheet reported, Obama shared one of her proudest mom moments from her time in the White House in her memoir Becoming. It happened on the night the Supreme Court recognized gay marriage as legal across the United States — when the White House displayed rainbow lights.

“The normal protocol was that we check in with the Secret Service agents posted by the elevator anytime we wanted to leave the residence … Malia and I just busted past the agents on duty, neither one of us making eye contact," Obama wrote, according to Cheat Sheet. The Secret Service agents ended up catching up with the pair, but mother and daughter were able to convince them to slip out a side door for moment to check out the lights for themselves. She added:

It had taken us ten minutes to get out of our own home, but we’d done it. We were outside, standing on a patch of lawn … out of sight of the public but with a beautiful, close-up view of the White House, lit up with pride.

As a fellow mom, I love how much Michelle Obama strived to instill some level of "normal" during her daughters' eight years living in the White House. Although their experience was obviously not that of the typical American teenager, it seems Malia and Sasha were able to remain grounded with the guidance of their parents.

It would be interesting to hear what the Obama girls have to say about their time as First Daughters. Perhaps one or both of them will take after their talented mom and write a memoir in the future? Hey, I'd read it!