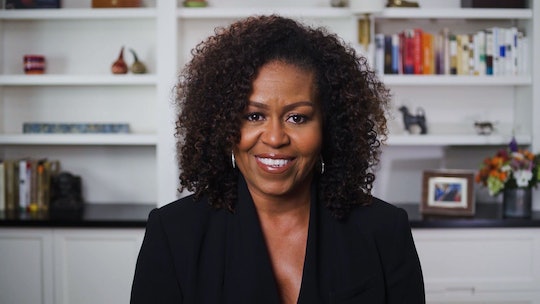 Michelle Obama delivered a truly powerful address on the first night of the Democratic National Convention. Beyond stating that President Donald Trump is simply "in over his head," Obama also stressed during her DNC speech that this presidential election will greatly impact children across the nation while expressing her support for presumptive Democratic nominee Joe Biden.

More Like This
The Obamas’ New Family Rule? Get Vaccinated If You Want To Hang Out With Us
Biden Proposes Plan To Give Every Child Free “High-Quality” Preschool
11 Candid Moments From Prince Harry’s Interview On Dax Shepard’s Armchair Expert
Everything There Is To Know About The Friends Reunion

Although Obama only mentioned President Trump once by name during her speech, she's previously said on her podcast that this presidency has personally affected her mental health, sharing that she's been waking up in the middle of the night because she's "worried about something."

During her speech on Monday evening, Obama, who established the Let's Move Initiative and launched "Let Girls Learn" during her time as first lady, urged voters to think about the future. "You know how much I care about all of our children," she said. "So if you take one thing from my words tonight it is this: If you think things cannot possibly get worse, trust me, they can and they will if we don't make a change in this election. If we have any hope of ending this chaos, we have got to vote for Joe Biden like our lives depend on it."

Since taking office in 2016, the Trump administration has ended Obama's "Let Girls Learn" program, proposed looser rules for healthy foods in school lunches, and repealed education standards, according to The Washington Post. What's more, this administration has separated undocumented immigrant families at the border of United States and Mexico under a "zero tolerance" policy that put kids in "cages." Furthermore, Trump has continued to ignore science behind issues like climate change, according to Scientific American.

During her DNC speech, Obama went on to say that she knows from experience that empathy is needed in the White House — and children have been seeing the opposite. "But right now kids are seeing what happens when we stop requiring empathy for one another," she said on Monday. "They're looking around wondering if we've been lying to them this whole time about who we are and what we truly value. They see people shouting in grocery stores, unwilling to wear a mask to keep us all safe. They see people calling the police on folks minding their own business just because the color of their skin."

Obama ended her speech by quoting the late congressman John Lewis, saying that if you see something that is not right, you must say and do something about it. One way to do so? Vote. "That is the truest form of empathy, not just feeling but doing, not just for ourselves or our kids, for all our kids," she said. "And if we want to keep the possibility of progress alive in our time, if we want to be able to look our children in the eye after this election, we have got to reassert our place in American history."