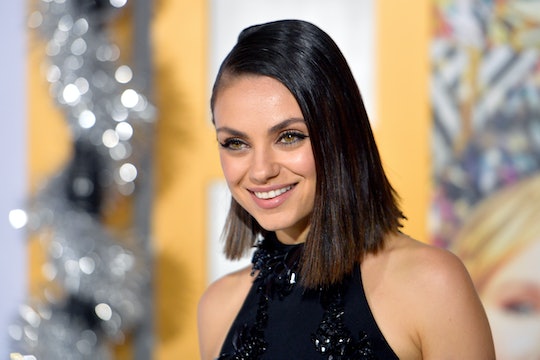 Celebrities are entitled to their own parenting choices, just like everyone else. But sometimes, they say things that make fans do a double-take. But, don't worry, y'all: Mila Kunis explained her controversial present policy because she's not really "anti-gift," as she had discussed recently. Although really, she shouldn’t have to explain herself, the actress did reveal to Shaquille O’Neal while he was hosting Jimmy Kimmel Live! what she meant when she previously discussed her family’s gift policy during the holidays.

Speaking about her and husband Aston Kutcher’s 3-year-old daughter, Wyatt, and 11-month old son, Dimitri, Kunis explained that her kids have been pretty spoiled in the past. “They get so many wonderful gifts from my family and my husband’s family so he and I give her literally one present,” she told the basketball pro of Wyatt’s Christmas. And really, there’s nothing wrong with that. Each family celebrates the holidays in their own, unique ways, and sometimes it’s about more than just the presents.

But, as Kunis made clear in her talk with O’Neal, she isn’t “anit-gift,” as many had accused her of being. She’s simply anti-over-gifting, which is completely different. For Kunis and Kutcher, the holiday season became a time of just too much stuff, and so it’s totally understandable that they would want to make sure that their children truly appreciate all that they do have.

But, earlier in October, the actress' revelation that she doesn't give a lot of gifts for Christmas or Hannukah wasn't exactly met with unwavering support. Speaking to Entertainment Tonight, Kunis originally said that her children had become accustomed to being gifted extraordinary amounts of presents:

Last year when we celebrated Christmas, Wyatt was 2 and it was too much. We didn’t give her anything ― it was the grandparents. The kid no longer appreciates the one gift. They don’t even know what they’re expecting; They’re just expecting stuff.

And it's in that expectation Kunis describes that many can relate to witnessing in their own children, or themselves. And it's also important to point out that it's quite a privilege to be able to decide not to buy your children any presents, knowing that other family members will do that, and that your children don't need anything around the holidays, besides love.

Many online were quick to applaud the couple's decision to try and downsize around the holidays.

However, Kunis' initial remarks about not getting her children Christmas gifts weren't well-received by everyone, with many claiming that it was basically the one time of the year when it is socially acceptable to spoil your kids.

But, really, the decision of whether you get your children any gifts for Christmas or any other holiday is completely yours alone as a parent. Of course, Kunis is a celebrity, and therefore subject to mass criticism by the internet, but that's beside the point.

What really matters around the holidays is spending quality time with the people who matter the most to you — and as Kunis also told O'Neal, sometimes that means with one specific body part. When she talked about what her son Dimitri would want for Christmas, her answer was both hilarious, and true.

He gets boob and he’s fine.

But really, even if her son wasn't breastfeeding, Kunis' comments would be totally fine. She isn't anti-gift, and she isn't going overboard with presents, either. She's just recognizing that her children have gotten a little too familiar with all the stuff that comes with the holidays, and she wants them to know that there's more to the season than that.