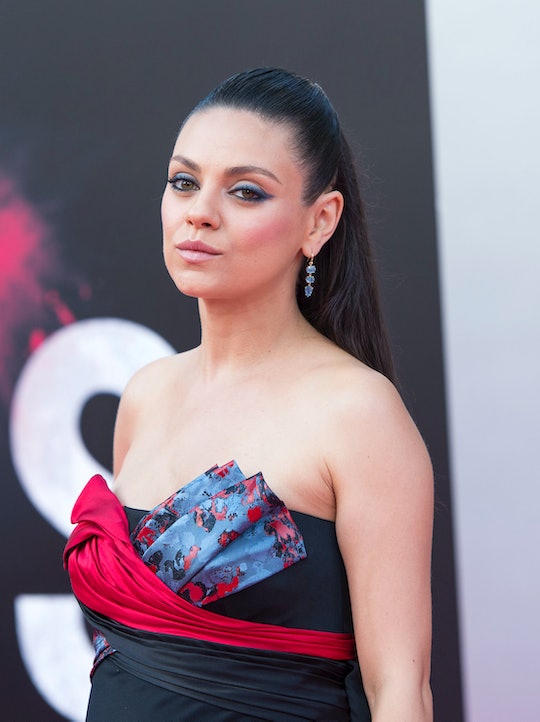 Two years after giving birth to daughter Wyatt in 2014, Mila Kunis has reportedly welcomed a new addition to the family (finally)! Kunis gave birth to her second child, a boy, with Ashton Kutcher, and the baby, whose name has not yet been released, is undoubtedly adorable. E! News first broke the story on Thursday to a flurry of congratulatory Tweets from fans across the globe. Romper has reached out to Kunis' rep for confirmation and is awaiting a response.

Update: In an email to Romper on Thursday evening, Kunis' representative confirmed that the couple had welcomed their second child, a boy.

Kunis confirmed her second pregnancy to Us Weeky in June. On The Ellen Show, she hinted that she and Kutcher may have been trying to get pregnant. Kutcher revealed the couple was expecting a boy on The Today Show in October. He revealed the gender of their baby when talked about how excited 2-year-old Wyatt is to be a big sister.

"She points to Mila and she’s like, ‘Baby brother!’ when she points to the belly,” Kutcher said.

Kutcher also talked about being a little calmer at the prospect of having a baby the second time around.

“The first one, I almost became a doula," he said on The Tonight Show. "I was reading every book. I was ready. I had like a catcher’s mitt on. This one, I haven’t done anything. I’m like, ‘Well, we didn’t break the first one.’ They’re really durable—that’s what you realize. They don’t break very easily.”

For Kunis, the biggest struggle after having her first child was finding the balance between work and motherhood.

"I think that when I got pregnant with Wyatt, I put so much pressure on myself to figure out how am I going to balance work and life, and I realized it's impossible. I think it literally ate me alive," Kunis said in an interview with The Today Show. The actress noted that she's filmed only one movie (Bad Moms, which was released in July) between her two pregnancies.

In an interview with Entertainment Tonight, Kunis discussed how having children affected her priorities. "I know that when we decided to have a kid, we were ready to no longer be selfish. Or at least start the process, because innately, as humans, we are really selfish people,” she said.

Kunis also opened up to ET about how much she's learned from having a child.

“You learn how to be a great partner and great wife and a great woman and be yourself and still be responsible for you know, a living child,” she said. “It's definitely a learning process.”

We wonder what Kunis will learn with baby number two. Congratulations to the happy couple!