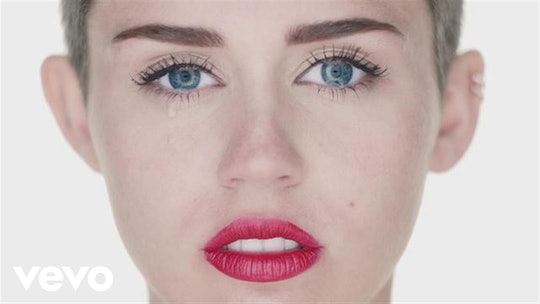 Early this Wednesday morning, following the Tuesday election results, Miley Cyrus tweeted a tearful video discussing Hillary Clinton's electoral loss. The video clearly shows that the "Wrecking Ball" singer was deeply affected by the election's outcome. I'm sure most Clinton advocates have been crying since Trump has been named the President of the United States, but Cyrus bravely recorded and posted her disappointment for all to see. In the video, Cyrus is in a dark room, but even in the dimly-lit area, it is clear that the singer had been crying for quite some time before hitting the record button. If you look closely, you can see blackish impressions under her glossy eyes. In addition, her choice of words scream devastation.

"So, probably like most people—well, maybe not, because given the result—maybe I really am different and maybe a lot of people that I'm surrounded by think with open minds and open hearts like I do."

"And I do want to say that I've been very vocal for my support for everyone besides Donald Trump. Heavily supported Bernie. Heavily supported Hillary. And I still think that in her lifetime she deserves to be the first female president, and that's what makes me so sad."

After that above last sentence, Cyrus visibly breaks down, turning her eyes down, and away from the camera. In a tone of defeat, the musical artist brought up the fact that Trump used the The Rolling Stones’ song lyrics, “You Can’t Always Get What You Want,” during his acceptance speech. Unfortunately, those words rang true for Cyrus.

It's a very painful video to watch. Moreover, it's rare to see a celeb expose their vulnerabilities to the public, and in this tweet Cyrus is absolutely crushed. “This hurts to say, but I even accept you as President of the United States, and that’s fine, because, I think now I want to be a hopeful hippie. I want to be hopeful that you will step in, too.” She went through the stages of grief on camera to spread awareness of her pain. Therefore, it made perfect sense that she would end her video with the acceptance of what, to her, is an ugly reality.

Cyrus' tears echo those that trickle down the cheeks of people forced to accept a breakup, forced move, or unexpected death. There is nothing sadder than to see someone struggle to swallow a pill they never asked for. To the former Hannah Montana starlet, the presidential announcement put her, and other citizens and celebrities,' dreams of a 2016 female president to rest.