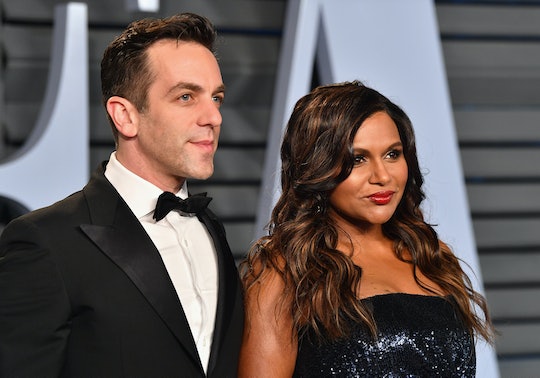 Perhaps you're familiar with the unique frustration of having a friend with a terrible love life who refuses to take your advice, even though you clearly know what's best for them. Imagine how much worse that would be if said friend didn't even hear your advice, because you don't actually know her; she's a famous person who does not yet follow you on Twitter. That's the dilemma shippers are faced with after seeing Mindy Kaling tearing up while talking about B.J. Novak on Today Wednesday morning. Just go to him, girl!

For those who don't have a Polaroids-and-string collage on their walls mapping the evidence of Kaling and Novak's relationship, in all its iterations, a quick briefing: the pair met while co-starring and writing for The Office, and dated for a couple of years in the mid-2000s. After breaking up, they stayed friends — the best of friends you've ever seen, in fact — and they're known for flaunting that friendship on social media. They're the cutest couple that doesn't exist, and now, after seeing Kaling's real-time reaction to a sweet post from Novak on live TV, fans can no longer contain themselves, and they're practically demanding a reconciliation.

About a month ago, Novak posted a photo to Twitter and Instagram featuring a movie poster advertising Kaling's latest project, A Wrinkle in Time. He noted that the poster sat just outside the small apartment Kaling had once occupied, and added, "Congrats Mindy and a future congrats to all those who see you in it and are inspired to do great things." Kaling was understandably touched.

She tweeted that she was "crying," but the internet is a playground for hyperbole, so perhaps some people didn't take her at her word. But during an interview on Wednesday, TODAY's Hoda Kotb read the tweet aloud to Kaling, who responded, "That's really moving. When I was coming up there was no one who looked like me on TV or film and that was such a nice thing that he remembered that." And that's as far as she got before the tears literally started rolling down her face.

And then fans' hearts all melted at once.

Can you feel the love?

That was all it took for Kaling-Novak shippers to renew their insistence that the two belong together.

It's the happy ending she deserves, especially if you just finished watching The Mindy Project on Hulu, and have trouble separating Kaling from her character, who almost marries a coworker, has a baby with him, and then... I won't spoil it for you, but there are some serious parallels going on here.

However, it's a little troubling that so many people are absolutely adamant that Novak must be the father of Kaling's daughter Katherine, who was born in December. Kaling has not revealed the identity of Katherine's father, or even confirmed that he exists, and until she says otherwise, that's her business and hers alone.

The possibility of a renewed romance between the two has been a hot topic lately, and not just because of Novak's tweet; in early March, Kaling also brought him as her date to the Vanity Fair Oscar party, which many assumed (or at least hoped) was a reunion.

The sometimes-flirty banter between the former colleagues has sparked rumors for years, and they even have a cute little pet name for each other: "soup snakes."

This is a reference to a throwaway gag from The Office, in which a character misreads the phrase "soul mates" (click the thread below for a full explanation).

If you admire a celebrity, it's only natural to want them to be happy, and thanks to fairy tales, most people feel as though happiness and marriage (or at least romantic love) are intrinsically linked.

But that's not necessarily the case. Kaling just starred in an Ava DuVernay film, she's in the upcoming Ocean's 8, and she's the executive producer and co-creator of a new NBC comedy, Champions.

Oh, and of course, she's got a new baby and she's friends with Oprah now, which is pretty cool.

The fact is that for whatever reason, Kaling and Novak have chosen to be friends, not married. And keep in mind there's always the possibility that one of them does feel something more, and this constant nagging by the public is actually really painful to read.

Let's just be happy that they have each other in whatever capacity they want, and if that someday changes into history's greatest love story, we can all rest assured that it'll spawn an amazing sitcom.