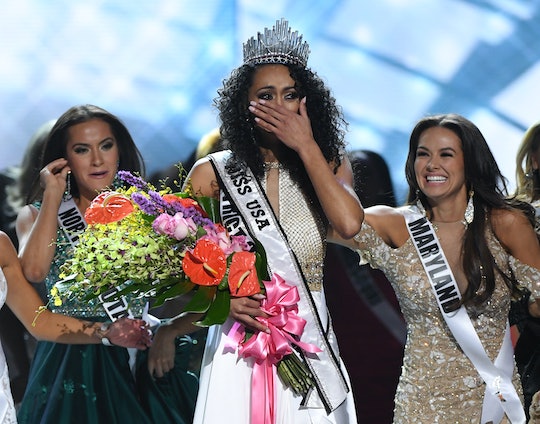 Given our nation's current health care situation, it feels as if any comment on the topic is bound to spark a debate. Kára McCullough of Washington, D.C., for instance, shared her own thoughts at Sunday night's Miss USA pageant, and to say that viewers were not pleased with her perspective is an understatement. What's more, the newly crowned Miss USA tried to clarify her health care answer on Tuesday, but people were still left unhappy at how misinformed McCullough appeared to be on a few key issues.

It all started with McCullough's answer to the question of whether or not she thinks affordable health care is a right or privilege for U.S. citizens. "I'm definitely going to say it's a privilege," McCullough responded on Sunday night. "As a government employee, I am granted health care and I see firsthand that, for one to have health care, you need to have jobs, so therefore we need to continue to cultivate this environment that we're given the opportunity to have health care as well as jobs to all the American citizens worldwide."

Honestly, the response didn't really satisfy the question, and sent Twitter into overdrive, with plenty of people accusing her of being out of touch, especially for someone hoping to represent the United States. You can watch McCullough's confusing original answer below:

However, while clarifying her stance later, McCullough actually expressed the opposite view. "I am privileged to have health care and I do believe that it should be a right," she told Good Morning America's Michael Strahan on Tuesday, adding, "I hope and pray moving forward that health care is a right for all worldwide."

So it kind of seems like McCullough didn't comprehend what the question was asking at first; Rather than insisting health care itself is a privilege, it seems like she really just meant that she was privileged, and wished that others could experience the same benefits. The 25-year-old, who is employed by the Nuclear Regulatory Commission, asserted: "Having a job, I have to look at health care like it is a privilege."

But McCullough's initial answer on health care wasn't the only problematic part of her performance. McCullough also disappointed viewers on Sunday — many of whom had been rooting for her up until that point — in her refusal to adopt the word "feminism," instead advocating for "equalism" to take its place.

Her wavering answers on health care and feminism constitute an uncertain platform, which isn't sitting well with people. As this year's Miss USA winner, you'd think McCullough would be a little more firm in her stances, but that just isn't so. Though she insisted to The Washington Post that D.C. yielded its second Miss USA in a row for all its "intelligent people ... immersed in diversity," her comments leave a lot to be desired in the realms of knowledge and understanding.