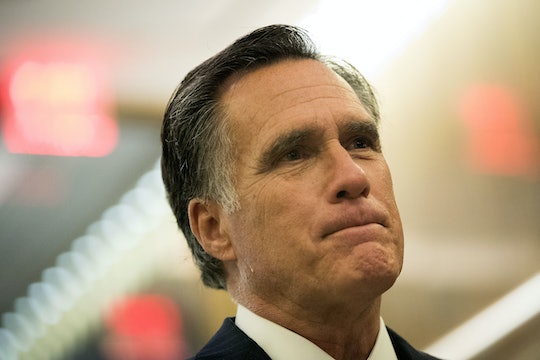 For decades, there have been relatively few issues that Republicans and Democrats can agree upon. Issues of immigration, abortion, and health care are generally starkly different for the two parties. However, sometimes, politicians on both sides of the aisle come together on important issues or world events. And just as both Republicans and Democrats condemned the terrorist attacks in Barcelona, Spain, Thursday, so have they called out the white supremacists responsible for the tragedy in Charlottesville, Virginia, last week. Except Donald Trump. But now, Mitt Romney just called out Trump and his statements are seriously on point.

On Aug. 15, Romney took to Twitter to express his frustration at Trump's comments that there was wrongdoing from "both sides" in Charlottesville, tweeting, "No, not the same. One side is racist, bigoted, Nazi. The other opposes racism and bigotry. Morally different universes." And on Friday, Romney took his disappointment to his Facebook page, issuing a statement calling on the president to clarify his confusing and troubling remarks. "What we heard is now the reality," Romney wrote, "and unless it is addressed by the president as such, with unprecedented candor and strength, there may commence an unraveling of our national fabric." And while Romney's status is already receiving backlash from Trump supporters, his remarks remain poignant, and completely necessary at this point in history.

As many other Republicans have come against Trump in some way or another since his inauguration, Romney's comments aren't too surprising, although they're still significant. "In homes across the nation, children are asking their parents what this means," Romney's statement says. "Jews, blacks, Hispanics, Muslims are as much a part of America as whites and Protestants. But today they wonder."

And truly, Trump's comments have caused backlash from politicians everywhere. Lindsey Graham, John McCain, Marco Rubio, Jeff Flake, Cory Gardner have all come out against Trump's response to Charlottesville. "There are two sides to a story," Trump said at a Tuesday press conference when asked about Charlottesville. "I thought what took place was a horrible moment for the country, but there are two sides to a story." He then went on to equate white supremacists with the "alt-left," citing violence on "both sides" as cause for blame.

Romney's response is the latest in a series of increasingly balked Republicans who are ashamed at what the GOP has become. And as controversial as Romney's statements might be, his proposed solution is fairly simple:

He should address the American people, acknowledge that he was wrong, apologize. State forcefully and unequivocally that racists are 100% to blame for the murder and violence in Charlottesville. Testify that there is no conceivable comparison or moral equivalency between the Nazis--who brutally murdered millions of Jews and who hundreds of thousands of Americans gave their lives to defeat--and the counter-protestors who were outraged to see fools parading the Nazi flag, Nazi armband and Nazi salute. And once and for all, he must definitively repudiate the support of David Duke and his ilk and call for every American to banish racists and haters from any and every association.