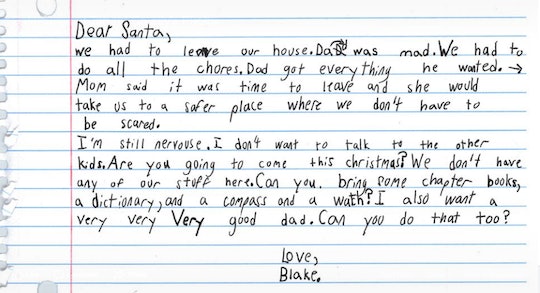 Sometimes it's difficult to remember that Christmas isn't always a happy and joyful time for everyone, and especially for children who might be living in a vulnerable situation. So when one mom found her 7-year-old's heartbreaking letter to Santa while living in a shelter for victims of domestic violence, people on social media rallied around them to help make their Christmas a little more magical.

A young boy named Blake recently moved into the Safe Haven shelter in Tarrant County, Texas with his mom. According to the young boy's letter to Santa, which the shelter shared on Facebook, the two recently left a difficult home situation to go to a "safer place where we don’t have to be scared." And they left their possessions behind.

Safe Haven shared on Facebook that Blake's mom found the letter to Santa in her son's backpack a few weeks ago, and what she found there was enough to break the heart of any person who read it.

We had to leave our house. Dad was mad. We had to do all the chores. Dad got everything he wanted. Mom said it was time to leave and she would take us to a safer place where we don’t have to be scared.

I’m still nervous. I don’t want to talk to the other kids. Are you going to come this Christmas? We don’t have any of our stuff here. Can you bring some chapter books, a dictionary, and a compass and a watch? I also want a very, very, very good dad. Can you do that, too?

The response to Blake's letter to Santa since it was posted on Facebook has been astounding. Safe Haven tells Romper that thousands of people have come forward to offer donations and messages of support for Blake and his mom, both of whom have been made aware of the messages.

So many people have reached out to Safe Haven that the shelter, which is housing 117 women and children over the holiday season, is having a difficult time keeping up. Most people's response to Blake's letter was much like one social media user, who wrote, "I would love to fulfill Blake’s request. This is absolutely gut wrenching. Any specific books that he is interested in? Please, I would love to help."

Safe Haven recently explained that Blake's wish list has been fulfilled via the shelter's donation site as well as its Amazon Wish List, and that's not even the best part. Donations for other children in need continue to come in. "The amount of monetary support and in-kind support we have received is honestly unreal," a spokesperson for Safe Haven tells Romper. "We've received donations from people across the country."

With Christmas around the corner, I hope Blake and his mom know how many people around the world are thinking of them.