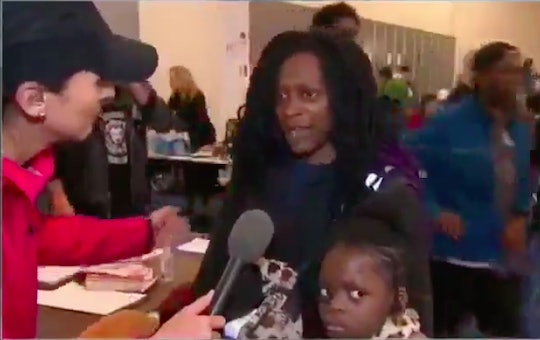 Thousands of people living in the path of Hurricane Harvey are struggling. They are fighting their way through torrential downpours, high winds, and the uncertainty of what tomorrow might bring. And as they are simply trying their best to survive this massive and devastating storm, some have been faced with the added stress of reporters attempting to interview them — to capture their pain and uncertainty for a sound byte. While some welcome the opportunity to inform the rest of the world of the devastation that's happened to their lives, other survivors simply are not having it. And a perfect example of the latter and the pain that is crippling so many Texans right now is this mom fleeing Hurricane Harvey and shut down a CNN reporter on live television. Because let's get real here: she has more important things to worry about than being on the news right now.

A woman who had been trapped by Hurricane Harvey with her children was finally rescued after 36 hours. Rather than being given a little space to recover, she suddenly found herself with a microphone in her face, expected to answer questions about her family's horrifying ordeal, despite the fact that she was visibly traumatized. The CNN correspondent interviewing her was sort of sweetly relentless, continually touching her arm and using a soothing voice. But still... a bit relentless. Questioning the woman as she and her daughter both wept. Until finally, this mom simply wasn't having it for one more second.

The woman, who was identified as Danielle, explained to CNN correspondent Rosa Flores that her family had been through a serious ordeal while waiting to be rescued:

We walked through four feet of water to get food on the first day. Yeah, that’s a lot of sh*t. But y’all sit here, y’all trying to interview people during their worst times — like that’s not the smartest thing to do. Like people are really breaking down and y’all sitting here with cameras and microphones trying to ask us what the f*ck is wrong with us. And you really trying to understand with the microphone still in my face? With me shivering cold, with my kids wet, and you still putting the microphone in my face.

Flores apologized repeatedly for reading the situation wrong, and the report hastily returned to CNN's Jim Acosta who noted the family was obviously upset.

While the woman was justifiably frustrated and traumatized, it bears repeating that journalists like CNN's Rosa Flores are putting themselves in situations like interviewing survivors of Hurricane Harvey for a reason. They are there to bear witness, to inform the rest of the world. News coverage of tragedies like these help to fund relief efforts and frequently assist family members hoping to connect with survivors.

Flores misread a situation here. She didn't fully understand how upset this woman would get discussing her situation. But that doesn't mean journalists are the "bad guys" for trying to paint a clear picture of the devastation Hurricane Harvey has caused all over Texas.

It simply means everyone is human, and everyone is just trying to find a way to survive and make sense of this tragic situation — one way or another.

More Like This
Viral Reddit Post Asks If A Toddler Can Watch Cartoons Without Headphones On A Plane
Over 10,000 Sippy Cups & Bottles For Toddlers Recalled Due To Lead Poisoning Hazard
Kim Kardashian Says She's "Shaken" By Balenciaga's Ad Campaign Featuring Children
"Corn Kid" Handed Out Over 40,000 Cans Of Corn At A Food Bank Ahead Of Thanksgiving