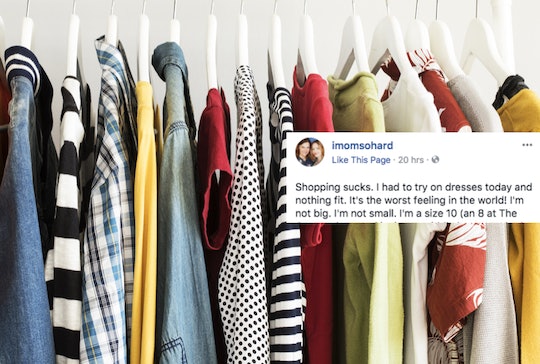 If you've given birth, chances are your body doesn't look exactly as it did during your pre-pregnancy days. Even if you did manage to lose the baby weight, clothing still may not fit the same way — and that's completely OK. (Because the miracle of life and all of that.) With that said, this mom's viral post perfectly sums up the hell that is clothes shopping with a post-baby pooch. And it's a must-see.

Kristen Hensley — half of the hilarious duo that comprises IMomSoHard — took to Facebook to blow off some steam after a particularly disappointing shopping trip. On Friday, Oct. 27, Hensley wrote, "Shopping sucks. I had to try on dresses today and nothing fit. It's the worst feeling in the world! I'm not big. I'm not small. I'm a size 10 (an 8 at The Gap) and most of its in my middle because I had babies."

Ah yes, that pesky mom pooch. I know it well. No matter how hard a mama tries to eat right and exercise regularly, for some of us, that extra bit around the middle never quite goes away. Hensley continues her impassioned rant, writing:

I run. I lift weights and I'm strong. And yet these f*cking dresses made me feel weak, misshapen, and lumpy, which in all honesty I kinda am.

It's honest. It's raw. Yet, while Hensley's post is hilariously over-the-top, it seems to have struck a chord with moms. (I mean, those 73,000 likes and over 2,000 shares in less than 24 hours can speak for themselves.) Obviously, plenty of mothers out there have felt the same way about their own bodies at some point in time. Still, it seems Hensley eventually comes to terms with her body by the end of the post. At least for now. She writes:

Then I got home, looked at pictures of my kids, smelled the chicken I had cooking on the stove, and poured a glass of wine. Because in the end, its just a dress. And I look better in pants anyway.

Hensley and her IMomSoHard partner in crime, Jen Smedley, are famous for their quirky vlogs about everything parenting. And this isn't the first time they've reflect on the reality of mom bods. Not by a long shot. If you remember, their hilarious take on swim suit season went viral earlier this year.

"I do not feel confident in a swimming suit at all, but I'm not going to let that get in the way of me building a moat," Hensley says in the video. "Do you feel like that way the whole time you've got it on?" Smedley asks. To which Hensley replies, "Not after I have a couple of cocktails."

The duo then proceed to try on several "stylish" bathing suits with odd cutouts that weren't exactly flattering or comfortable. In the end, Hensley concluded: "I want my daughter to love her life and to love herself, and she's not going to do it because I tell her to do it. She's going to do it because I teach her to do it ... I would love a revenge body, but I'll take a f*ck-it attitude."

And who could forget this video featuring the funny moms lamenting the reality of Spanx? I had me laughing until I was crying. "It's like my organs and my uterus are trying to escape down out of the hole." Priceless.

I'm not gonna lie: I've managed to lose the baby weight after each of my three pregnancies. But even though I run marathons and lift weights regularly, guess what? I still have a mom pooch. I have saggy skin with an extra layer of chub that wasn't there before I grew three humans inside of my body. I have stretch marks around my belly button. Sure, I'm self-conscious about it sometimes. But this body created life — and for this reason I'm thankful for my pooch.

Besides, it's nothing that leggings paired with flowy tunic shirts can't fix.