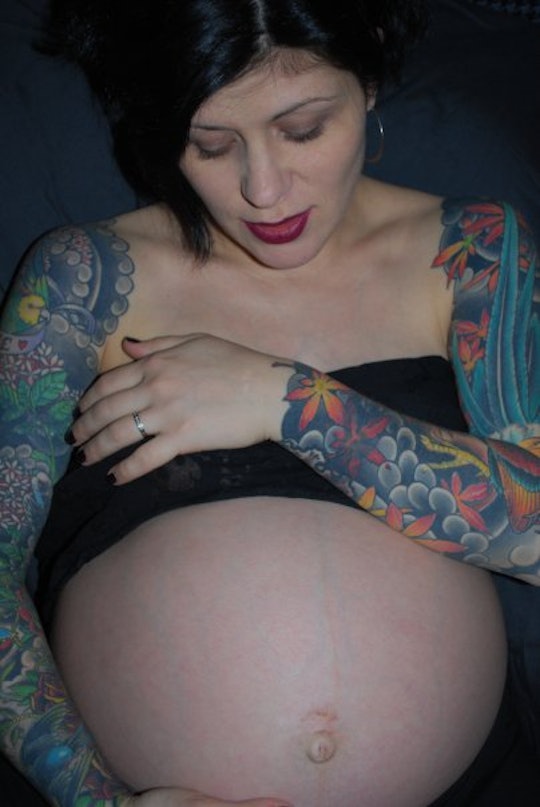 My husband and I were not even married yet when we decided to have our first baby. He was 30 and I was 36 and we knew we wanted to build our life together and have a family, but for us at the time, the formality of marriage was just not top priority. A baby was. We were nervous but excited, and as I got busy with my charts and thermometers and my assortment of pee sticks of one kind and another, he was especially excited by the promise of sex, sex, and more sex. Passionate sex, baby-making sex, pregnant sex: he didn’t mind as long as there was sex.

A friend had told me that even the most fertile of couples could take six months to conceive and that trying for even a year or more was still normal for someone my age. I had one close friend who has been trying for close to two years. I saw a long and potentially stressful road ahead of weeks of hope followed by weeks of disappointment, over and over; to my husband that sounded like the promise of years of frequent sex. I was almost sad for him when after exactly six weeks, two ovulations and five scheduled baby-making sessions, I was pregnant.

Even before my pregnancy was confirmed by pee stick and later by blood test at my doctor’s office, I’d suspected it because I already felt so different. Soon, I was exhausted, I was nauseated all the time, everything was tender and painful. On top of all that, I had a UTI that added to my pain and discomfort. Still, I was elated, excited, nervous, full of the wonder and magic of biology and amazed by what my body was doing with so little input from me. My charts were cast aside, barely used. I had moved on to weekly emails with new charts about what fruit or vegetable my baby currently resembled. My husband doted on me, bringing me tea and vitamins and ice cream and all the things. He rubbed my feet, he held my hair out of my face as I threw up, he listened to me marvel and complain and wonder. He humored me when at six weeks — far too early — I started talking about names and teared up with me at seven weeks when we first saw our little lentil on the ultrasound screen, just a tiny heartbeat. Boom, boom, boom. And night after night, my husband looked at me expectantly while I, oblivious, rolled onto my side and tried to get comfortable enough to sleep.

'This is it for your sex life,' the husband intoned. We looked from him to his wife, who nodded severely.

Around ten weeks, we started telling people. Friends of ours, a couple who had been married for a few years and who had two young children, took us to dinner one night to celebrate. Over dessert, the celebration became a warning. “This is it for your sex life,” the husband intoned. We looked from him to his wife, who nodded severely. “He’s not kidding,” she agreed. “If it’s not one thing, it’s another. The kids, your bodies, your exhaustion, the bills, whatever. If you even still care about sex after all that, you’ll have to find new and creative ways to make it happen, but trust me, don’t even bother until your baby is sleeping through the night and you start to get some of your life back.”

I couldn’t even imagine having the baby at that point, much less all that would go before sleeping through the night. On the way home that night, my husband looked panic-stricken, but said nothing.

The second trimester brought me the relief my weekly emails promised. My nausea was gone, and my energy was back. My breasts had doubled in size but were no longer hurting. I needed maternity clothing and was having fun shopping, and I was even occasionally getting seats on the subway. I even felt a glimmer of libido again, and as game as my husband was, now he was nervous. What if I hurt the baby? he kept asking. Are you sure it’s okay? I wish I’d told him to get it while he could, because my second trimester was over all too quickly and in the third I found myself as big as a house, still working and exercising, but spending all my spare time focused on the future. We wrote a birth plan. We learned a whole new language we’d soon need to speak: the language of parenting a baby. We investigated strollers and bassinets and read about the benefits of breastfeeding, co-sleeping and baby-wearing. We studied our finances. We were in the middle of buying an apartment. I made a spreadsheet for our latest undertaking: selecting the perfect baby name. We’d decided that we did want to get married after all, so we spent several months discussing, planning, and executing a shotgun wedding of the very best sort. Worst of all, I had terrible insomnia. Unable to sleep for more than a couple hours at a stretch and in any position other than the one that draped me over my strange, snakelike pregnancy pillow and turned my back to my husband, I fidgeted endlessly every night, kicking my restless legs and making sure that if I was awake and miserable, my husband would be too. People offered unhelpful advice: sleep now, because once the baby’s born, you won’t sleep again for the next 18 years. I tossed and turned, stressed that I was missing my only chance. I was not thinking about sex.

When the baby was born by c-section, my husband doted on both me and her in his loving, caring way. He carried every bag, changed all the diapers and kept rubbing my feet at night. He brewed me pots of nursing tea out of nettles and thistles and made sure my stash of nipple creams, breast pads, oatmeal bath powders and so on was always replenished. He helped me change my bandages, worried about how much walking and lifting I was doing. He held my hand affectionately, kissed me chastely on the forehead, and snuggled with me when I could stand it. But we were both sleeping so little that neither of us had any interest in initiating anything more intimate than that.

When she was four months old, the three of us spent a long weekend on vacation in a resort town. It was our first time traveling with her. She’d been great on the flight, and we were looking forward to relaxing. But when she was asleep by 6 p.m., sprawled out on the room’s king sized bed like a letter X, we looked at each other in the light of the setting sun coming through the window, understanding that this weekend was not going to be what we imagined. We were stuck. In a hotel room. In the dark. With a sleeping infant. “Hey,” I whispered, suddenly inspired. “Follow me.”

My husband smiled as we tiptoed into the bathroom, where we closed the door and turned on the light. Still whispering, and always keeping an ear out for the baby, we had uncomfortable but creative sex in the empty bathtub, and then we showered together, amusing ourselves with the little soaps and shower gels the hotel provided. We wrapped ourselves in the hotel bathrobes and while he sat on the lidded toilet seat and read the novel he’d started over a year earlier, I perched on the counter next to the sink with my laptop and wrote a blog entry. It felt weirdly but incredibly romantic, and we luxuriated in two hours of quiet, together, before the baby woke up and needed to nurse again.

I was still tired but feeling great. My period was back and my libido was trying hard to make a new entrance.

When our daughter was nine months old, my body was relatively back to what it had been pre-pregnancy. I was still tired but feeling great. My period was back and my libido was trying hard to make a new entrance. Because our baby was still co-sleeping and our bed was taken, sex was infrequent, hasty, and often improvised in uncomfortable places about the apartment. I was approaching 38 and I wanted to have another baby sooner rather than later. “Woo hoo!” said my husband once I got him on board with the idea of doing this all over again. He remembered what his primary responsibility was here, and it was a job he liked. “That means more sex, right? Think this time it will take a little longer?”

I distinctly remember the first scheduled session we had because it was quick and perfunctory and the only one we had. I had barely started charting, when I got pregnant right away, and while that news is never bad for anyone trying to conceive, I remember how his face fell when he realized the implications for the next few years of our sex life. I reminded him of our tryst in that hotel bathroom, and I teased him with the promise of more to come.