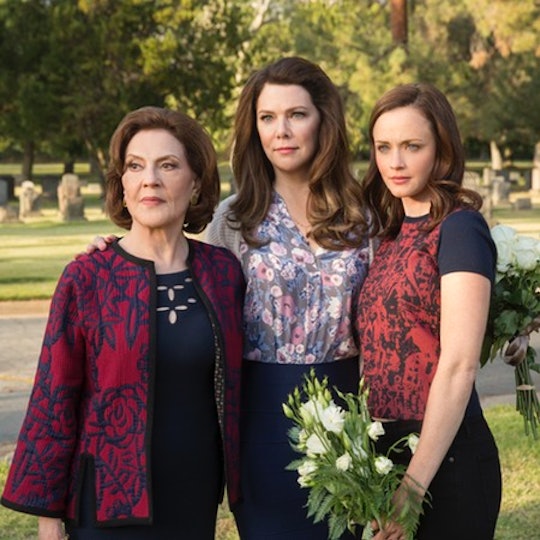 My Mom & I Are The Real-Life Lorelai & Rory, & That's Not Always A Good Thing

Every Wednesday during the early 2000s, my mom and I had a standing TV date: We'd settle onto the couch and watch Lorelai and Rory drink coffee and exchange banter and console each other through heartbreak on Gilmore Girls. History repeated itself last Friday, when I sat on the couch with my mom and watched all four episodes of the Netflix reboot, Gilmore Girls: A Year In The Life.

We both felt connected to Lorelai and Rory because our lives were eerily similar: for instance, my mother was a single mom who worked her way up the career ladder to successfully provide for me, her only child. Minus the small town and the "born into money" element, my mom and I are the real-life Lorelai and Rory. But sometimes, that can get a bit tricky.

To Tell or Not to Tell

If you're BFFs with your mom, it's easy for the line between "friend" and "daughter" to get blurred sometimes, making it difficult to figure out what to tell and what to keep from your mom. Like that time I decided it was a good idea to throw a party at our apartment without telling my mom. She’s always been cool with my friends coming over to hang out or crash on the couch if they needed a place to stay. So why wouldn’t it be OK if I invited several people over while she was out of town?

After days of going back and forth between telling and not telling her, I ended up telling her a few days after the party that I had people over. But I conveniently left out the part about drinking Smirnoff Ice and wine coolers at the party because I knew it would disappoint her. Almost immediately, she found a bottle cap in my room and called me out for lying to her, just as Lorelai got upset at Rory for taking a joyride with Jess when she was supposed to be helping him study.

The only time my mom and my relationship was really strained was over my ex-boyfriend. She didn’t like the way he treated me and hated how he could talk his way out of everything, especially with me.

Although I eventually broke up with my ex, there would be days at a time where my mom and I would not talk to each other. It was by far the worst period of our relationship. So I understand why Rory didn’t come clean with Lorelai about her relationship with Logan in the reboot. Sometimes, it’s best to just keep some things a secret.

Like Lorelai, my mom was always open with me about sex and she knew that I would likely have sex before I was married. All she asked was that I be prepared, be safe and not lie to her if and when it happened. But I didn't tell her when I was actually planning to have sex with my boyfriend, because I was worried that she would look at me differently afterwards. Then one day, she found my birth control pills. When we talked about it later, she cried because it was the first time we didn't discuss a major decision in my life beforehand. It just proved to me that I should have talked to her about it without worrying I would disappoint her.

My mom raised me on her own and rarely discussed my dad. Growing up, I don’t remember wondering where he was or why he wasn’t around since I had other strong and present father figures in my life, like my Uncle Phil, but she started to tell me more and more about him when I was in middle school. While she never explicitly said anything bad about him, it was obvious that their relationship stirred up bad memories.

Getting over heartbreak is tough. Toss in a kid and co-parenting every other weekend with someone you’d prefer to have out of your life forever, and of course discussing dad would be an uncomfortable topic for my mom. I used to worry that asking about him would hurt her feelings in some way, even though I genuinely wanted to know more about him, just like Rory felt whenever she brought up Christopher with Lorelai. Now, we're at the point where we can talk about him without worrying about hurting each other's feelings, but it took a while to get there.

Wait, So You Don’t Support All My Decisions?

When your mom is your best friend and your main support system, it's easy to forget that she's still your mom. She wants and expects the best from you, so she often disagrees with your decisions, especially if she doesn't think they're in your best interest.

I am so used to my mom being on my side that when she wasn’t, it really threw me for a loop. Once, I decided to move in with my boyfriend and she told me it was a terrible idea. We didn’t talk for a few days after that, because I decided to do what I felt was best for me at the time and move in with him. While she wasn't happy about my decision, she eventually respected it.

There were so many decisions that Rory made that Lorelai did not agree with, such as writing a book about their lives or dating Logan and Jess. But eventually, they were able to reach a common ground and respect each other’s decisions, which has always been the case with me and my mom as well.

Having a mom as a best friend can be complicated and incredibly amazing at the same time. Like every relationship, it takes having an open and honest dialogue about our issues to make it work, but I wouldn't change anything about it for the world — and neither, I'm sure, would Lorelai and Rory.