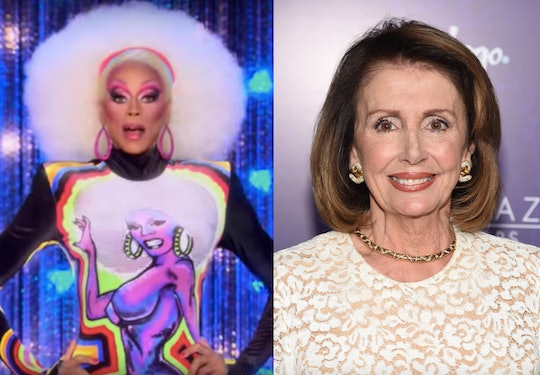 Nancy Pelosi Will Be A Judge On 'RuPaul's Drag Race,' & Twitter Is Freaking Out

Once upon a time, politics and entertainment were two distinct and separate fields, but over the past 30-odd years, those worlds have increasingly overlapped. Former actor Ronald Reagan served two terms as president, then-candidate Bill Clinton played his saxophone on The Arsenio Hall Show, a retired professional wrestler became the governor of Minnesota, and now, a bit player from Home Alone 2 is running the country. So should we really be shocked that House Minority Leader Nancy Pelosi will be on RuPaul's Drag Race as a guest judge?

Those lines sure are blurring at an increasing rate, though. During President Barack Obama's term, he appeared on the web series Between Two Ferns and filmed a viral video for BuzzFeed, and Vice President Joe Biden appeared on Parks and Recreation and Law & Order: Special Victims Unit. Failed vice presidential candidate Sarah Palin went on to star in two failed reality shows (or three, if you count the one that never even made it to air). Former Gov. Rick Perry and former Rep. Tom DeLay, both from Texas, have each competed on Dancing With the Stars. And Drag Race isn't even Pelosi's first prime time appearance; she had a cameo on the series finale of 30 Rock in 2013.

Still, judging drag queens in a lip syncing contest is quite different from anything we've seen a politician do on TV in the past, and the news has left the people of Twitter utterly shook.

According to Billboard, Pelosi will appear on Season 3 of the All Stars spinoff, which features fan favorites from past seasons competing against each other for cash and prizes. The show has yet to reveal which episode Pelosi will judge, but the 90-minute season premiere will air on Thursday, Jan. 25 at 8:00 p.m. Eastern Time on VH1.

Though most people are utterly baffled about the casting choice, it's hard for fans not to get a little excited, if only for the possible spectacle of seeing America's first and only woman Speaker of the House earnestly discuss contouring and tucking techniques with the contestants.

Pelosi's district includes San Francisco, one of the most prominent LGBTQ communities in the world, and she's long been a champion for LGBTQ rights. A representative told the Washington Post that this informed her decision to appear on Drag Race, as a show of solidarity with her constituents amid the Trump administration's attacks against them.

The rep also shared with the Post that Pelosi really is a fan of the show; she's already taped her episode, and she "had a fabulous time." Of course she did — that's literally the only kind of time one could possibly have while guest-judging Drag Race.

But still, this news is kind of bananas, and some people think it's a sign that we're all living in some sort of Matrix-style simulation.

Seriously, more than one person actually had that thought, and now I'm actually kind of worried... Or maybe relieved, because if we're all floating in tubes of synthetic amniotic fluid right now, serving as human batteries for our robot overlords, then at least the Trump presidency isn't real.

Once you've gotten over the guest judge news, don't forget to familiarize yourself with the contestants: Chi Chi DeVayne, BenDeLaCreme, Trixie Mattel, Milk, Thorgy Thor, Kennedy Davenport, Aja, Morgan McMichaels, and Shangela. There may even be one more mystery competitor, based on Ru's coy announcement.

And if you can't get enough of the high-stakes drag competition, sashay over to VH1's Drag Race Fantasy League site, where you can draft your favorite six queens to your team to earn some prizes, including tickets to the RuPaul's Drag Race Season 10 finale taping. Honestly, though, with Pelosi on the show this season, we're all winners, aren't we?