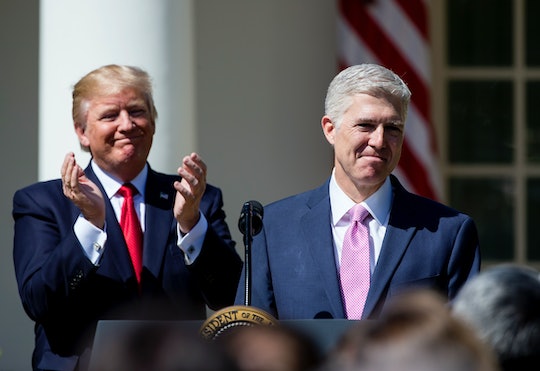 Neil Gorsuch’s First SCOTUS Case Is A Big One

For the first time since the death of Justice Antonin Scalia in February 2016, the Supreme Court of the United States once again has a full complement of judges as a result of the confirmation of Republican judge Neil Gorsuch earlier this month. On Wednesday, the nine justices will assemble for what will be Neil Gorsuch's first SCOTUS case — and the outcome could be highly controversial. According to The Independent, the court will hear Trinity Lutheran v. Comer, a religious liberty case meant to determine whether churches should be allowed to receive money from state governments. Now that the Supreme Court is once again tipped in favor of conservative judges, it seems likely that Gorsuch's first case may set the tone for future cases to come — particularly as he has ruled in favor of religious rights as an appeals court judge in years passed.

According to NBC News, the case concerns the Trinity Lutheran Church in Missouri, which applied five years ago for state funding to cover the gravel playgrounds in its preschool and daycare center with rubber from recycled tires. The program was designed to assist non-profit organizations in updating their playgrounds and making them safer, but because the Missouri constitution prohibits state money from going to religious organizations, Trinity Lutheran's application was denied.

Citing discrimination, the church sued the state, and although it lost in the lower courts, it is now looking for a SCOTUS ruling that would ensure that schools run by churches cannot be excluded from government programs providing assistance to non-profit organizations. In a brief filed a year ago, lawyers for Trinity Lutheran claimed that, by denying the church's application, the state of Missouri "[exhibited] an undeniable hostility to religion that offends the Constitution’s essential mandate of religious neutrality,” according to The Huffington Post. Yet lawyers representing the state of Missouri responded by arguing that declining to offer funding to the church has nothing to do with infringing upon its actual right to freedom of religion:

Trinity Lutheran remains free, without any public subsidy, to worship, teach, pray, and practice any other aspect of its faith however it wishes. The State merely declines to offer financial support.

Making things more complicated? Even though Missouri is one of 39 states across the country that currently have restrictions on the state support of churches, last week, Missouri Gov. Eric Greitens, spoke out against the restriction. Greitens, a Republican who was elected to office in February, was not in office at the time of the original lawsuit, but said he thought religious organizations should be allowed to be considered for state grants, according to NBC News. In a statement, Greitens said that requests from religious organizations should be "judged on the merits like any other applicant."

Judging by Gorsuch's track record on ruling in cases concerning religious liberty, Trinity Lutheran may be feeling optimistic. As a 10th Circuit Court of Appeals judge, Gorsuch ruled in favor of religious rights in the controversial Hobby Lobby case, which found that businesses do not have to offer their employees insurance coverage for contraception if it conflicted with the religious beliefs of the owners, according to The Washington Post. Gorsuch also ruled in favor of the right of a Native American inmate in Wyoming to use the prison's sweat lodge for religious purposes, according to CNN, arguing that "while those convicted of crime in our society lawfully forfeit a great many civil liberties ... the sincere exercise of religion should not be among them."

While Gorsuch's take on the Trinity Lutheran case is still to be seen, the implications of the decision could be major, and could possibly result in the already existing state bans against funding for religious organizations as unconstitutional. A vote against the church however, could be seen as a big move in the fundamental constitutional divide between church and state. Either way, it appears that the outcome may take a while to be properly decided: according to The Independent, the judges aren't expected to vote on the case until June.