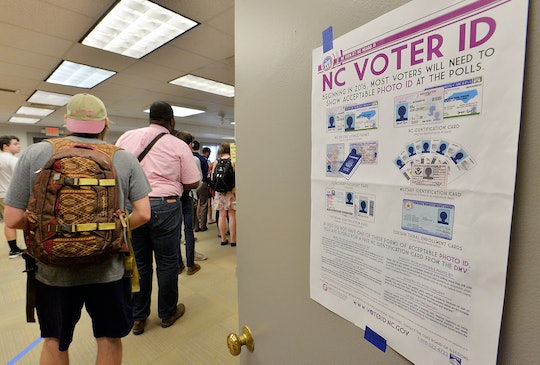 Come November 2016, North Carolina voters will no longer feel like they're not welcome at the polls. In 2013 a law was created to make it harder for less fortunate people to vote in the state. But now things are changing — and this change could not have come at a better or more critical election in recent history. On Friday, North Carolina's Voter ID law was struck down and it is fantastic for so many reasons.

First, some background on the horribly limiting law. In 2013, North Carolina Governor Pat McCrory signed the bill into, what the Washington Post called one of the "most wide-ranging Voter ID laws." The law was pretty expansive as it covered a bunch of tiny revisions that only hurt the voters in North Carolina and did nothing to help them. This included shortening the early voting period, eliminating same-day voter registration, and requiring a government issued voter ID among other things. As you can see, this hurt a wide variety of voters in the state — young voters, voters who worked long hours, and voters who did not have government issued IDs.

Now, three years later, a federal appeals court overturned certain parts of the law making it a huge success for citizens in the state that were targeted by the bill.

Certain parts of the bill that were overturned included those that required people to show a state issued voter ID card. Race was a major factor in over turning the law, as 4th Circuit Court of Appeals Judge Diana Motz thought the bill was enacted with "racially discriminatory intent." Writing:

We cannot ignore the record evidence that, because of race, the legislature enacted one of the largest restrictions of the franchise in modern North Carolina history.

This is incredible. Not only did the appeals court recognize that the bill was too large and unfairly limiting but it also acknowledged that the bill had racial implications — targeting both the poor and underprivileged. But since it was overturned, that means that poor and underprivileged voters will no longer feel like they can't vote. They will now have plenty of time to head to the polls during Early Voting, be able to register on-site on Election Day, and not have to show a government-issued ID at the polls.

According to the Los Angeles Times, this could also mean good things for Hillary Clinton in the state of North Carolina. This is because the overturning of the law removes "voting barriers that would have fallen hardest on African-Americans and other Democratic leaning voters." In 2008 the typically conservative state of North Carolina turned "blue" and helped vote Barack Obama into presidency. The removal of the barriers could do the same in 2016.