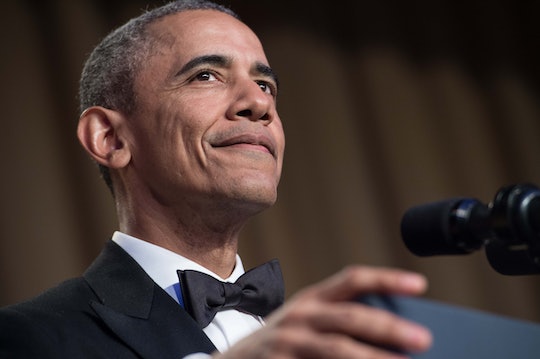 On Jan. 10, President Obama will deliver his "farewell speech" to the American people before relinquishing the office he's occupied with grace, dignity, and class for the past eight years to his successor. In the address, he'll undoubtedly work to defend his legacy and shape how he'll be remembered as president, as well as lay out his vision for what he believes America is and can become, as he's done repeatedly throughout his terms. It will be a landmark speech, as it's his last major one as our nation's leader. As such, it evokes a nostalgia for Obama's best speeches as president — which showcase his ability to connect with an oftentimes hurting citizenry, to infuse hope and humor, to share parts of himself with a nation grappling with seemingly insurmountable challenges.

Barack Obama catapulted into the country's political consciousness with a soaring oration at the 2004 Democratic National Convention, recounting his unlikely and, he said, quintessentially American path into government. There, he also delivered the revelatory line, "There’s not a liberal America and a conservative America; there’s the United States of America." Four years later, when he himself was running for president, he capitalized on a controversial moment to talk to America about race — specifically, his own identity as a black man — in a way that was unprecedented for a politician.

Since his first, and then second, election, Obama has at times assumed the grim position of consoler-in-chief in the face of national tragedies, as well as presided over Thanksgiving turkey pardons with dad jokes so corny they earned him some serious side eye from his teenage daughters.

The most moving of these addresses illustrate his boundless charisma, compassion, and humanity — and they'll endure long after he vacates the Oval Office.

When President Obama won the Nobel Peace Prize in 2009, the United States was enmeshed in an ongoing war (one that lasted through his own presidency). So, his claiming of the honor was controversial, and Obama did, in fact, issue a thoughtful defense of war on humanitarian grounds when accepting the honor on Oslo, Norway. At the time, the president argued that the use of force can prevent even more unthinkable atrocities from unfolding, and insisted that the United States has done just that while recognizing those who have served.

"Whatever mistakes we have made, the plain fact is this: The United States of America has helped underwrite global security for more than six decades with the blood of our citizens and the strength of our arms," he said, according to a White House speech transcript. "The service of our men and women in uniform has promoted peace and prosperity from Germany to Korea, and enabled democracy to take hold in places like the Balkans."

The speech was a candid look into the president's decision-making process as he determines how to keep Americans safe and how to engage with the rest of the world. Even for those who disagree with him, it's hard to ignore the rare combination of compassion and pragmatism that defines Obama's thinking.

It was one of the most heinous and gut-wrenching crimes in modern history, and it's really no wonder that even the president teared up in addressing the nation in its immediate aftermath. And Obama's speech that accompanied his visceral reaction to the gunning down of 20 first graders and six adults in a classroom in Newtown, Connecticut, further exemplified his mission to assuage the anguish of bereaved families and a horrified constituency — without shying away from calling out the policies that made it possible for it to happen.

In his speech, Obama told the country that there are "no words" for the mourning of the violent deaths of children, but insisted that there have to be:

Can we say that we're truly doing enough to give all the children of this country the chance to live out their lives in happiness and with purpose? I've been reflecting on this the last few days, and if we're honest with ourselves, the answer is no. We're not doing enough, and we will have to change ... We can't tolerate this anymore.

Gun laws, he said "will have to change," making it clear that he was not willing to accept this atrocity as an inevitable byproduct of unfettered second amendment rights. It was the fourth mass shooting of his presidency, Mic.com reported, and Obama revealed himself to be as outraged and exhausted by the carnage as many Americans were and are.

No matter which president delivered the commemoration at the 50th anniversary of the brutal beating of civil rights marchers in Selma, Alabama, it would have been an emotional event: Our nation remembered a pivotal moment in American history that still haunts us to this day. That it was Barack Obama, the United States' first African American president, made it even more apparent that the marchers' cause had been an integral one. And Obama rose to the occasion with a speech that The Washington Post's Greg Jaffe lauded as "the most ambitious and radical" of his presidency.

With its omnipresent optimism and eye toward the future, it's vintage Obama. He described, for example, an ever-evolving country constantly working to live up to the ideals of its Constitution:

What greater expression of faith in the American experiment than this? What greater form of patriotism is there than the belief that America is not yet finished, that we are strong enough to be self-critical, that each successive generation can look upon our imperfections and decide that it is in our power to remake this nation to more closely align with our highest ideals?

As was the case after Newtown, it was difficult to find the words to talk about the unthinkable tragedy that left one pastor and eight parishioners dead at the hands of a white gunman, whom the parishioners had welcomed into their bible study group at the Emanuel African Methodist Episcopal Church in Charleston, South Carolina. The murderer had targeted the worshippers because they were black, making the massacre a hate crime, as well. Prior to presenting the eulogy for the pastor, Rev. Clementa C. Pickney, the president movingly sang the opening of "Amazing Grace" on live TV, in tribute to the victims, before launching into a tribute that "drew on all of Mr. Obama’s gifts of language and empathy and searching intellect," as Michiko Kakutani of The New York Times wrote.

Covering such topics as the safe spaces churches presented during the Civil Rights era and the painful symbolism of the Confederate flag, according to USA Today, Obama ultimately reflected on the power of grace. "As a nation, out of this terrible tragedy, God has visited grace upon us, for he has allowed us to see where we’ve been blind," he told the grieving congregation and country. "He has given us the chance, where we’ve been lost, to find our best selves."

Obama once again demonstrated that he believes he's led a nation of strivers with the ability to overcome and prosper, no matter what.

Even though he's constantly dealing with rabid partisanship, the collective woes of a nation, and an unparalleled responsibility to the rest of the world, Obama still knows how to have fun. And the side of the man that earned him the title of "the funniest president" was on full display at his very last White House Correspondents' Dinner in May, where he roasted the then-presidential candidates, touched on his bromance with Canadian Prime Minister Justin Trudeau, made a joke about getting high, and ended it all with a literal mic drop.

"Obama out," he said as he let the microphone fall and left the stage.

Considering Obama's best speeches as president, the wisdom and aspirations he packed into them, he will be very much missed after he does the same (either literally or figuratively) at his farewell speech later this month.