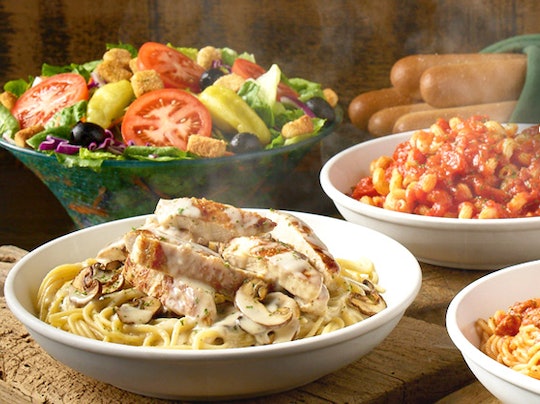 If you love a bargain and an absolutely stupid amount of noodles, boy, are you in luck. Olive Garden's Pasta Pass is back, and this year, they've really upped the ante. The Italian-esque chain has been running its Never Ending Pasta Bowl promotion every fall since 1995, during which customers can create custom combinations of the restaurant's pasta and sauce varieties. In 2014, the promotion was paired with an offering of 1,000 Pasta Passes at $100 each, which customers could redeem for unlimited pasta, sauces, toppings, and Coca-Cola soft drinks for the entirety of the seven-week event.

After an unprecedented demand for Pasta Passes, the following year Olive Garden added unlimited soup or salad and breadsticks to the promotion, and also sold 1,000 Family Edition Pasta Passes for $300, which entitled the bearer and up to additional three guests to eat until they couldn't breathe anymore (or for seven weeks, whichever came first). Both versions of the passes sold out in less than one minute, so the next year, the chain offered 21,000 Pasta Passes, in honor of the 21st anniversary of the Never Ending Pasta Bowl promotion. Then, things got really bonkers. The passes sold out in just one second, according to the restaurant's press release, so last year, it offered customers a chance at one of 22,000 Pasta Passes, now god for eight weeks instead of seven (although soda was no longer included). Additionally, 50 lucky customers could pay $200 for a Pasta Passport, which came with all the benefits of the Pasta Pass, plus a trip for two to Italy.

This year, there's no need to pack your bags to enjoy the promotion, but once again, Olive Garden has cranked up the pasta preposterousness. As always, there are regular Pasta Passes available for $100 — 23,000 of them this time — but if you can't bear the idea of only being able to cram your gullet full of discount Fettuccine Alfredo for a couple of months, don't fret; this year, Olive Garden is also selling 1,000 Annual Pasta Passes for $300, which can be redeemed (as the name implies) for an entire year. That's 363 days of bottomless carbs, as Olive Garden mercifully closes on Thanksgiving and Christmas so that your family can see you at least a couple times during your year of gluttony.

The passes do come with some rules. There's no sharing allowed, and the promotion is for dine-in customers only, so don't start thinking you can pull a fast one on Olive Garden and get them to cater your parties for pennies. There's also a limit of "one redemption per visit," so unfortunately, you'll have to take a break between lunch and dinner at the TGI Friday's next door. Don't worry, though, they have an endless apps promotion, so you don't actually have to stop eating.

But are the Pasta Passes actually a good deal? I've done the math for you: throughout the year, Olive Garden sells a Create Your Own Pasta Bowl, which has all the same customizable options as the Never Ending Pasta Bowls, for $9.99. That means that if you manage to eat 11 of them in eight weeks, or 31 in a year on the annual plan, the passes pay for themselves. Of course, you could throw together a pasta dinner at home for less than two bucks per serving, but the lack of effort and cleanup makes dining out inherently more valuable than a home-cooked meal (financially, anyway).

However, even with the Pasta Pass, your meal won't be completely free. It's conceivable that guests will occasionally spring for an appetizer, dessert, or a glass of wine, which I suppose is why Olive Garden's marketing team feels that this promotion is worth it. Even if you're trying to maximize your benefits by ordering nothing on the side by tap water, you'll still have to tip on the full value of the meal, unless you're a jackass. A 20 percent tip on the Create Your Own Pasta Bowl (and I really don't recommend leaving less than that) works out to less than two dollars per meal, meaning eight-week passholders would need to use their benefits 13 times, or about every four days, in order to get their money's worth, while annual passholders would need to eat 38 bowls of pasta, or one every ten days.

That being said, I personally hate tipping less than five dollars no matter how little my food cost, because a cheap entree isn't any easier to deliver than an expensive one. Besides, you're going to be seeing the same waitstaff a couple times a week, and if you're not completely heartless, you'll probably start to form some sort of relationships with the people bringing you that endless parade of noodles. Even if you're a sociopath, it's a good idea to pretend you like them, because duh, they're handling your food. Tipping five bucks per meal would mean annual passholders would need to eat at Olive Garden 60 times — every six days — to recoup their investment, while eight-week passholders would need to consume 20 pasta bowls, averaging one every three days. Still worth it to you? I'm getting nauseous just thinking about it, but if we were talking about pizza, I'd totally be game, so if noodles are your thing, grab a Pasta Pass before they sell out.