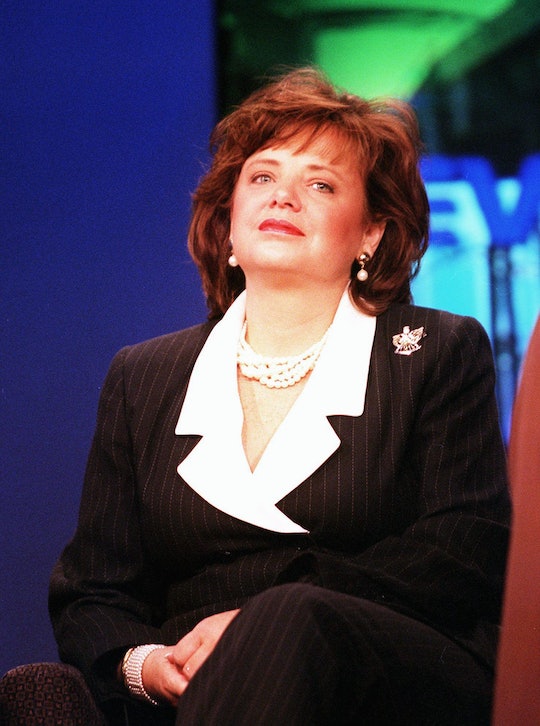 Patsy Ramsey Theories That 'The Case Of: JonBenet Ramsey' Should Cover

Patsy Ramsey died from ovarian cancer in 2006. She was buried next to her daughter, JonBenét Ramsey, who had been murdered 10 years earlier. In the 20 years since JonBenét's murder and the 10 years since Patsy Ramsey died, the mystery of JonBenét's death has remained unsolved. But that hasn't stopped armchair investigators from "working" the case, coming up with theories about Patsy Ramsey and her alleged involvement in her daughter's murder. Some of these theories are so pervasive they could potentially be covered in the new CBS docuseries The Case Of: JonBenét Ramsey.

It's important to remember that these are simply theories, folks — theories concocted by people who have felt invested in the case for the past 20 years, and have come to develop what they consider a "case" against the Ramsey family. The Ramsey family (John Ramsey, Patsy Ramsey, and JonBenét's brother, Burke Ramsey) was initially questioned by the Boulder Police Department at the time of JonBenét's death. In 2008, new DNA evidence cleared the entire Ramsey family of any involvement.

Suspicion continues to swirl around the beleaguered Ramsey family, regardless of any DNA evidence, or even a personal apology letter from Boulder County District Attorney Mary Lacy written to John Ramsey in 2008 that read in part:

To the extent that we may have contributed in any way to the public perception that you might have been involved in this crime, I am deeply sorry. No innocent person should have to endure such an extensive trial in the court of public opinion.

Despite this admission of error by local law authorities, theories that Patsy Ramsey killed her daughter persist to this day. Here are a few of the most widely circulated of the rumors:

It was Patsy Ramsey who found the ransom note for JonBenét on the morning of December 26, 1996. The note, which was addressed to John Ramsey, asked for the weirdly specific sum of $118,000 dollars (almost the exact amount of a bonus John Ramsey had recently received through his work). After JonBenét's body was discovered hours later in the basement of the family home (she had been strangled and hit over the head), the family members all submitted handwriting samples to be compared to the note. While John and Burke Ramsey's handwriting were not a match, some handwriting experts have claimed that Patsy Ramsey's handwriting reportedly matched fairly closely.

In a statement to Romper, however, Ramsey family attorney Wood stressed,

In terms of the accusations against John and Patsy Ramsey, the Boulder District Attorney, Mary Lacy, publicly exonerated them in 2008 based on irrefutable DNA evidence. She apologized to the family and assured them that in the future, they would be correctly treated as victims. The days of Ramsey accusations should have ended then and there. ... However, I acknowledge that the conclusion by District Attorney Lacy is difficult for many uninformed viewers to accept as the media with the active assistance of the Boulder Police Department disseminated lies about the family and the evidence for many years in a calculated public relations plan to apply pressure to John and Patsy. That plan was undertaken at the suggestion of the FBI and I confirmed that involvement and the existence of the plan as undisputed fact when I deposed former District Attorney Alex Hunter in past litigation related to the investigation.

In the 20 years since JonBenét's murder, many people still believe that Patsy killed her daughter. Steve Thomas, a retired Boulder police detective who worked on the case, even wrote a book claiming that he and other members of the Boulder police force believed Patsy Ramsey killed her daughter. Thomas contended in his book, JonBenet: Inside the Ramsey Murder Investigation, that Patsy Ramsey accidentally struck her daughter in the head on Christmas night and then strangled her daughter in a panic to cover it up. Thomas believed that John Ramsey allegedly helped his wife cover up the crime, but didn't think he had anything to do with his daughter's death. Ramsey attorney L. Lin Wood dismissed the book as nonsense, telling The New York Times that the theory ''is refuted in its entirety by medical evidence.'' In a recent interview with Dr. Phil McGraw (his first ever), Burke Ramsey dismissed the theory that his mother allegedly hurt his sister in a fit of rage, telling McGraw:

It doesn't make sense. Not to say she never got upset, but nothing near laying a finger on us, let alone killing her child.

Possibly one of the most disturbing theories about the murder of JonBenét Ramsey is the one that her brother, Burke, killed her, and their parents covered up for him. Theorists pointed to a variety of clues that Burke Ramsey may have allegedly killed JonBenét: A spoon with Burke's DNA on it was found by a pineapple, and there was pineapple discovered in JonBenét's stomach during an autopsy that she had eaten just hours before her death. One investigator felt that Burke's reaction to the news that his sister was missing was without emotion. When Dr. Phil McGraw pointed out in an interview that Burke "seemed unbothered by all this," he responded by saying:

Yeah, well, I can tell you I was very emotional with the attorneys. I would just randomly cry out of nowhere. I guess it's a combination of sitting in there with this weird guy that I never talked to before and asking me all of these personal questions, it's a combination of that and just kind of ... at some point you have to move on. I'm not saying I moved on then. It might have been kind of the other end. I didn't really get it. You have to stop crying at some point, I guess.

In May of 1999, the Boulder District Attorney and the Boulder Police Department publicly confirmed that Burke Ramsey was not a suspect or even a possible suspect. Any statement conveying that this young man was involved in the brutal murder of his sister — his life's best friend — is unquestionable false and defamatory. Conveying this false accusation for TV ratings is unconscionable and will result in litigation in the future as it has in the past. There is no legitimate journalistic or First Amendment value in broadcasting false accusations against Burke.

The Case Of: JonBenét Ramsey premieres Sunday, Sept 18 on CBS. It should be interesting to see which of these theories is addressed, if at all.