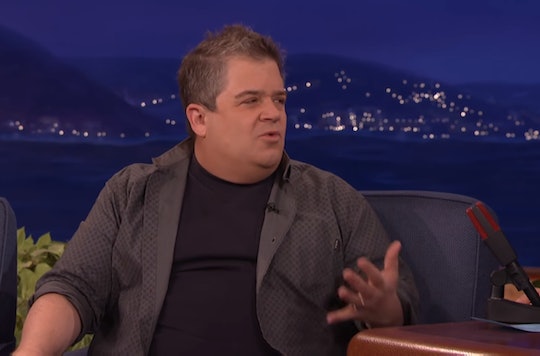 You'd think a late night talk show would be the absolute last place to bring up the sudden, tragic death of a wife and mother. But when Conan O'Brien asked how Patton Oswalt and his daughter are coping with his wife’s death, the comedian showed that he's ready to be funny again. Oswalt's wife, crime writer Michelle McNamara, died in her sleep in April, and just last month, Oswalt was still suffering from terrible grief (as one would expect). "It's 102 days later and I can confidently say I have reached a point where I'm crawling," he posted on Facebook. "Which, objectively, is an improvement. Maybe 102 days later I'll be walking."

He also promised his fans, "I'll start being funny again soon. What other choice do I have?" Now he's keeping that promise, because his Monday Conan appearance made it clear that he's ready to laugh again. "It feels weird to say it; I'm a widower," he began. "I'm like every bad '80s sitcom, where there's a dad raising a kid by himself and the mom is somehow... Except my '80s sitcom sucks. There's no punchlines, there's a lot of insomnia, there's a lot of me eating Cheetos for dinner... I'm waiting for my daughter to turn to the camera and go, 'No wonder I'm in therapy!'" It sounds like Full House, reimagined by Louis C.K.

Oswalt and McNamara's daughter, Alice, was just 7 when she lost her mother, and Oswalt said that having to tell her was the worst thing he'll ever go through. But he also revealed that she's handling it better than her dad, even asking to go right back to school after her mom's death. He also shared some of the cute but inappropriate comments her filterless friends had for him, and one not cute and shockingly inappropriate comment from an airline agent who he dubbed "The Polish Woman of Doom."

Oswalt returned to stand-up comedy this month, and shared a scene from Deadwood by way of explanation. "Pain or damage don’t end the world — or despair, or f***ing beatings," Ian McShane's character says in the clip. "The world ends when you’re dead. Until then, you got more punishment in store. Stand it like a man, and give some back." His next scheduled appearance is the Festival Supreme comedy show in October. Until then, follow him on Twitter and bask in his masters-level Trump trolling.