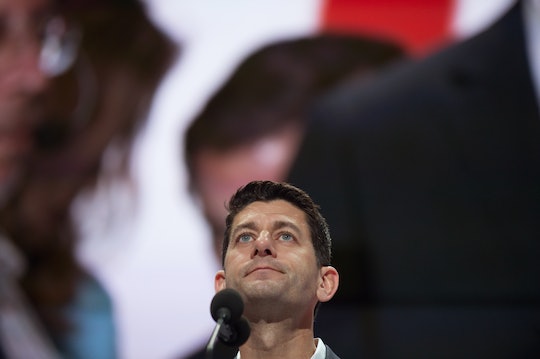 Paul Ryan's Intern Selfie Is Problematic For More Than One Reason

GOP Speaker of the House Paul Ryan posted a selfie with a large group of Capitol Hill interns on Saturday. Ryan gleefully stared into the camera sporting a big smile, matched with many smiling faces of seemingly excited interns behind him posing for the picture. But the picture was striking for many people – I for one was frustrated (not surprised) to see yet another depiction of what a lack of diversity in workplaces really looks like. The very large group of interns were overwhelmingly white. But aside from the visuals of the picture itself, it also reveals some of the very real racial systemic issues in society. Ryan's intern selfie is problematic for more than one reason. Lack of diversity in workplaces is a problem with many layers.

In a make-believe world, Ryan's picture perhaps only captured a large group of mostly white Capitol Hill interns by coincidence – maybe the interns of color were in the hallway, or on a lunch break. But this likely is not the case, since Capitol Hill starkly struggles with diversity in general. In a report by The Atlantic in 2012, two voluntary surveys and information cited to a profile by the National Journal revealed that out of 288 profiled top aides who work for congressional leaders, and Senate and House committees, only 7 percent of them identified as black, Asian, or Hispanic.

The survey also noted that people of color made up 17 percent of the entry-level positions on the Hill – a percentage that still significantly lagged behind representation of people of color in entry-level positions in the private sector in 2010. And more recently, in 2014, though efforts to improve diversity on the Hill have been made, John Jones, the chief of staff to Missouri Rep. Emanuel Cleaver, told The Daily Beast that lack of diversity on the Hill continued to be an issue:

There’s a challenge with having an African-American president… too many people are under the impression that we live in a post-racial society. Though that goal is within reach, we have not reached that goal,” Jones said. “There’s not a desire to put that emphasis in terms of hiring and diversity.”

It's clear Ryan's photo featuring overwhelmingly white interns on Capitol Hill was no coincidence, but perhaps consistent with the Hill's long problem with diversity as a whole. And many were quick to note on social media that the speaker posted the photo without acknowledging – or worse, possibly noticing – its glaring issue.

And though the interns likely stem from a number of House representatives, and congressional leaders, the Wisconsin Republican himself has previously been called out for race-related issues in his political career. In 2014 Congressional Black Caucus member Democratic California Rep. Barbara Lee said Ryan used "inner cities" during a radio interview as coded language for racial attacks against black people. And recently, many noted that Ryan has called out some of Donald Trump's remarks as racist ("textbook" definition even), but still endorses him for president.

Interestingly, Ryan's "inner cities" remarks that led to swift backlash in 2014 for its perceived racist undertones, addressed a "culture" of people with poor work ethic:

We have got this tailspin of culture, in our inner cities in particular, of men not working and just generations of men not even thinking about working or learning the value and the culture of work. There is a real culture problem here that has to be dealt with.

For many like myself, his remarks closely resembled commonly used rhetoric that targets and links black people, especially those living in the inner-cities, to being lazy, and other welfare-queen-like sentiments that are racialized, problematic, and help perpetuate dangerous biases. These biases and assumptions have been found to be filtered into policing, and hiring practices – ironically an issue that can result in a lack of diversity in workplaces... cue Ryan's selfie with Capitol Hill interns. (Ryan's office did not immediately return Romper's requests for comment.)

Lack of representation across industries is a systemic issue affecting people of color, far beyond Capitol Hill. Silicon Valley, for starters, notably lacks in diversity. Last March, a PBS report found that Silicon Valley's workforce was 71 percent male, 29 percent were women, 60 percent white, 23 percent Asian, and 8 percent Latino and 7 percent black. Recently, Facebook received backlash for blaming its lack of diversity (black and Hispanic reportedly representing 2 and 4 percent respectively) on a lack of available talent from applicants of color.

This is one of the many reasons intersectional feminism is so important. According to a report by the Census Bureau, women make about 78 cents on the dollar to what men earn. But for women of color specifically, the wage gaps are far wider. The need for intersectional feminism is perfectly illustrated in Ryan's selfie. Women are represented, but they are almost all white, and women and men of color are hardly there.

Ryan's photo with the Capitol Hill interns is problematic, but unfortunately in many cases, it paints a picture of a larger issue of America's systemic practice of a lack of diversity in the workplace.