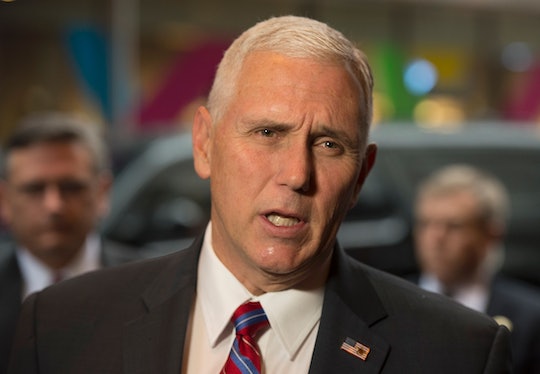 It was one of the biggest promises President-elect Donald Trump made during his campaign, and it's one that — according to Vice President-elect Mike Pence — he intends on keeping. On Wednesday, Pence said repealing Obamacare was the "first order of business" for the Trump administration after Inauguration Day, reassuring voters that Trump would be keeping his campaign vows. "The first order of business is to keep our promise to repeal Obamacare and replace it with the kind of healthcare reform that will lower the cost of health insurance without growing the size of government," Pence said at a news conference on Wednesday, according to Reuters. "Make no mistake about it."

Pence was joined by House Speaker Paul Ryan, who said that the 20 million Americans currently insured by the Affordable Care Act wouldn't suffer any coverage disruptions, according to CNN. When he and Pence were asked, however, what exactly the new healthcare plan entailed, Ryan simply said they had "plenty of ideas" and a plan, an answer that White House spokesperson Josh Earnest later criticized.

"One of the most articulate Republicans on Capitol Hill is the speaker of the House," Earnest said, according to Reuters. "And he did a news conference today where he was unable to explain why Republicans have not put forward their replacement plan."

Pence, however, said that Trump would be working with congressional leaders in order to craft a "legislative and executive action agenda for an orderly and smooth transition to a market-based healthcare reform system." As Inauguration Day ticks closer, however, and Republicans continue to reassert the quick replacement of Obamacare, demands for a more concrete plan have grown louder. The pushback from Democrats who want to see Obamacare continue has also grown stronger.

"When they try to hurt the progress we've made on quality health coverage, we're going to be engaged. We're going to fight with everything we have," Democratic Sen. Ben Cardin told ABC News on Wednesday. "It's not politics for us, it is the people we represent who are going to be at risk."

The president reportedly met with Democratic lawmakers on Wednesday and encouraged them to fight against efforts to repeal the Affordable Care Act. "That the country is clamoring to undo this thing is simply untrue," he reportedly said. Trump, on his end, tweeted that "Republicans must be careful in that the Dems own the failed ObamaCare disaster ... massive increases of ObamaCare will take place this year and Dems are to blame for the mess."

Regardless of the healthcare tiff currently brewing on Capitol Hill, an actual replacement for Obamacare has yet to emerge. Judging by Pence's words on Wednesday, though, that hasn't affected the Trump administrations' zest for repealing the current healthcare program.