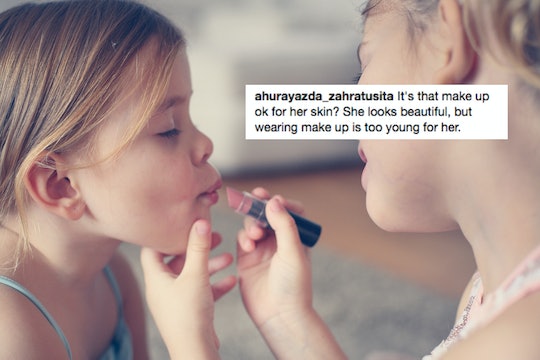 Parents letting their children wear makeup can bring about mixed reactions. Critics worry that the makeup gives children the idea that their looks are all that matters, or encourages unrealistic beauty expectations. Recently, people shamed a mom for letting her young daughter play with makeup, but she isn't worried. There isn't a hard and fast rule for when makeup becomes acceptable and every family is different.

In many ways, 3-year-old Liriana — whose last name has not been made public — is a kid just like any other. But when her mom made an Instagram dedicated to the everyday lives of Liriana and her brother, it quickly became clear that she has some serious skills with a makeup brush. The page shows the two doing all sorts of activities, but it is Liriana's makeup videos that have garnered the most attention, and not all of it has been good.

On one of Liriana's videos, showing her with expertly concealed (and imaginary) under-eye circles, eyeshadow, blush, mascara, and lipstick — all applied with perfectly manicured hands, got some heat.

When is was posted to the MyMakeupCover page, some of the comments were pretty nasty. One user wrote, "She's never going to believe she's beautiful without makeup." And another went straight to blaming her parents. "I don't like it. She's too young to do that and her parents are a**holes," they wrote. One wrote, "Why would you let that little girl wear makeup?" The comments likely come from a place of concern, and that is understandable.

Makeup can have a detrimental impact on girls' sense of self. A 2013 survey, conducted by the Renfrew Center Foundation, found that one in five girls who wear makeup between the ages of 8 and 18 have negative feelings about their appearances if they don't wear it. They often feel self-conscious, unattractive, or like something is missing from their faces without the makeup.

However, makeup isn't a bad thing in and of itself. Dr. Jamie Howard, a clinical psychologist at the Child Mind Institute, told New York Daily News that parents should use common sense when making decisions about makeup and always talk with children about what it means:

It’s very important for parents to communicate with their daughters that they love them just the way they are, and the way they look is not the most important thing. If you’re trying to make your daughter look pretty or prettier, that could be communicating a message that she is not OK.

Liriana's mother, Suella — whose last name is also not given — spoke with Yahoo Beauty about her daughter's makeup hobby and public reactions to it. While she wishes that people wouldn't take it so seriously, she explained that Liriana is only playing and mom is not going to let their negativity stop her daughter from doing what she loves:

It’s a little kid playing. But I’m not going to please everyone and I understand that, so I’ve learned to ignore them and appreciate the people supporting my daughter’s page.

Fortunately, there are plenty of supportive people on Liriana's page who do have positive things to say. One commenter, who said she was a makeup artist, advised Luella get her daughter natural products that won't hurt young, sensitive skin and said that she thinks the hobby should be encouraged:

Another mom commented and said that her daughter was much the same as a child and has gone on to do just fine for herself:

My daughter was putting on makeup at about that age. If anyone would have dared to talk trash to my face about it, they would walk away missing a few teeth. She's now 12, a champion wrestler, an "A" student, and a really great kid. Keyboard haters can go take a flyer.

Ultimately, it is up to each family to make the decision when, and if, they will let their children wear makeup. Even the best intended mom-shaming comments should be left unsaid.