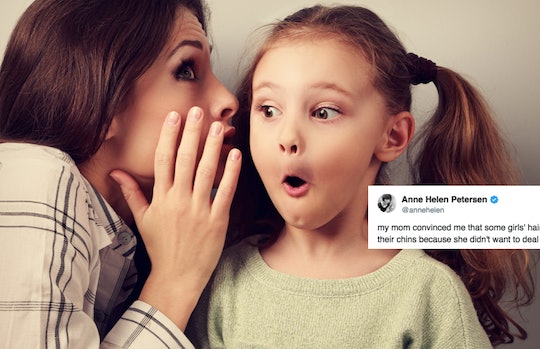 Most parents would agree that it's vital to teach children the importance of honesty. However, should a situation arise where telling your kids a white lie will save you some strife on a particularly rough day of parenting, most moms and dads would probably agree that it's totally cool to feed them a fib or two. Writer Nicole Cliffe recently took to Twitter to share a pretty funny anecdote about a white lie she and her husband told their kids, only to experience a major backfire when their babysitter got involved. The tweet quickly garnered hundreds of responses, in which people shared other hilarious white lies their parents told them as kids. And like Cliffe, a few Twitterers who are also parents tweeted the white lies they've told their kids.

"We had so many great months of the kids thinking that Scooby Snacks were plain whole wheat crackers, and then a babysitter bought a box of Scooby fruit snacks and the whole system collapsed in under three minutes," Cliffe, who writes a parenting advice column called Care and Feeding for Slate, wrote on Twitter. Honestly, that fib was pretty genius... Too bad she can't use it anymore.

The responses to her initial tweet are all pretty dang funny, with the lies ranging from totally harmless to a tad questionable.

Here are some of the best replies:

These Parents Performed An Elaborate Surgery On Their Kid's Bugs Bunny

I Just Hope This Goldfish & His Mom Are Happy Together

This Mom Conditioned Her Daughter To Like Dark Chocolate

You Can Only Imagine That When This Girl Learned The Truth, She Grew Her Hair As Long As Possible

Some White Lies Are For The Health Of Your Children... & Sometimes, They Actually Work Out Super Well

Next Time Your Kid Tries Throwing A Tantrum, This Mom Advises You Tell Them To Get In Line

This Mom Had Another Pretty Brilliant Tantrum Hack

Why Did The World Have To Make White Bread Taste So Much Better Than Whole Wheat Bread? WHY, WORLD, WHY?

One Dad's White Lie About Roaches Paid Off For A Couple Of Years... Until It Epically Backfired

Finally, This Mom Magically Has Her Toddler Hooked On Water With Lemon Instead Of Sugary Juice

It's important to remember that there's no perfect way to parent, and everyone is doing their best. While a 100 percent honesty policy probably works really well for some parents, there are plenty of serious situations in which fibbing is widely considered A-OK. For example, whether or not Santa, the Tooth Fairy, and the Easter Bunny are real; when your kid walks in on you having sex; when they ask what your vibrator is; when they want you to tell them their artwork is beautiful (but it is actually quite a mess); and when they need reassurance that everything is going to be OK, even though it truthfully might not be.

Additionally, according to Parenting.com, multiple experts agree that telling your child a white lie yields a very small chance of actually harming your child. Even the guy whose dad told him that roaches couldn't climb the stairs said the benefits of the white lie outweighed the betrayal of uncovering the truth.