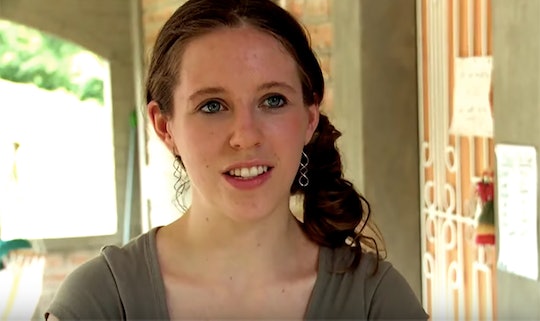 Counting On alum Derick Dillard took to Instagram on Monday night to share a cute video of his wife, Jill Duggar, cleaning their 8-month-old son's teeth for the first time. Although it's likely Dillard didn't intend to incite backlash with the post, some people are furious because they believe Jill Duggar is brushing her baby's teeth wrong. Of course, many self-identified experts are now chiming in on the issue, and as of Wednesday, the post's comments section looks like one big argument. But is it true that Jill is brushing her son's teeth incorrectly? Medical professionals have a lot to say on this topic.

In July 2017, Jill gave birth to her second son, Samuel, who she often refers to as "Sam." And ever since Sam made his debut, Jill and Dillard have regularly updated fans on his major milestones. From Sam's first diaper blowout (yes, I'm counting this as a milestone of sorts) to his monthly birthdays, there's no shortage of Sam on the couple's social media accounts. So, it's no surprise that Dillard posted a video on Monday night of Sam getting his first teeth cleaning. "Bedtime at the Dillard household has been fun with lots of 'firsts,'" Dillard captioned the video, according to Instagram. "#firsttoothbrushforsam #neweconomicsbooksfrommima." As Dillard points out in his narration of the footage, Sam has two visible teeth.

Shortly after fans caught wind of the post, many people took to its comments section to critique Jill's "rough" brushing of Sam's teeth.

"Waaaaay to rough when brushing the teeth," one commenter penned.

"Why is she brushing so rough????" another person asked.

Others commended Jill for doing a good job.

"I'm a dental nurse, she's doing a perfect job. Great ages to start too, Some parents don't brush their kids teeth till their a toddler," a supporter wrote.

"It’s good to see little Sam getting into the dental hygiene at a young age," another follower said. "#parentingwelldone."

And some people spoke out against the "troll accounts" supposedly targeting Jill and her family.

Quick call protective services, she’s brushing his teeth “too vigorously” clearly he keeps sticking his tongue out, which is what most small babies do because, obviously, they don’t know what they’re supposed to be doing. These troll accounts are a dime and dozen and so unoriginal in their incessant nitpicking.

Just because it is open to public doesn't mean they want people on here bullying other people! I never say anything to people on posts but its time to just watch the cute little baby brush his teeth for the first time as a soon to be parents its an exciting thing!!!

So, who is right in this debate? I visited WebMD, my home away from home, to find out.

Parents can start brushing their kids' teeth as soon as they get their first tooth, according to a WebMD article titled, "Caring for Your Baby's Teeth." As you might recall, Sam has two little teeth, which means Jill is on track with his dental hygiene.

Regarding the topic of whether Jill was brushing too roughly, the article does advise parents to brush their baby's teeth "gently." But it's worth pointing out that each parent probably has a different opinion of what gentle means. Not to mention, Sam doesn't appear to be in any visible pain during the brushing, and I don't think Jill would intentionally hurt her child.

As for the brush Jill used, it's difficult to tell the softness of the brush's head or if it's designed for infants specifically. Experts advise parents to use a long-handled brush that has a soft and small head, according to Working Mother. Additionally, the amount of toothpaste used should be "rice grain-sized" for children under the age of 3, according to the American Dental Association.

The conclusion to be drawn here is that fans can't jump to assumptions about Jill's parenting abilities based on one video. There are so many questions that can't be answered from a tiny bit of footage, like whether she used an infant toothbrush, for example. What's likely, however, is that Jill wouldn't put her child in harm's way. Although it's great when parents help out fellow parents, note that Jill and Derick didn't ask for advice in the post's caption. And if one day they do have questions about a parenting topic, I'm sure they'll send the word out to fans.