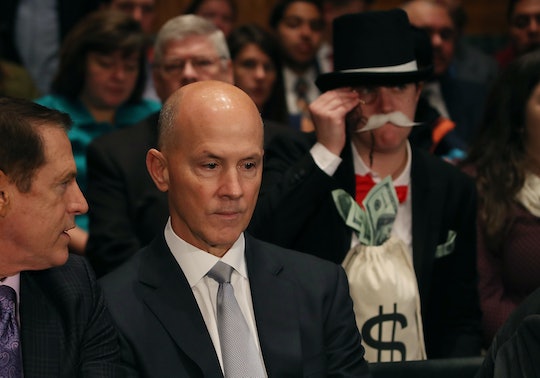 The Senate Banking Committee was assigned the arduous task of sitting through a hearing on Wednesday about the widespread Equifax data breach. It was a serious hearing, full of grim faces and explanations about how the breach affected 145 million people, many of whom found their names, addresses, social security numbers, and even credit card numbers stolen by hackers. As former Equifax CEO Richard Smith testified before the committee, he found his spotlight stolen by someone in a top hat and a monocle over his right shoulder. Yes, photos of the Monopoly guy at the Equifax hearing are real, and they're spectacular.

As Smith testified, the progressive non-profit Public Citizen and Americans for Financial Reform was hoping to raise awareness of Equifax's reported forced arbitration clause. This clause effectively hobbles private citizens from seeking out legal recourse, having (often unwittingly) already waived their right to sue and agreed to forced arbitration in the case of a dispute. Naturally, this massive security breach of the personal credit information of millions of Americans would be considered a dispute, but Equifax was able to use the forced arbitration clause to skirt around much of the accountability — or that's the argument that those affected are using, according to Fox News. And so... the Monopoly "Man" to the rescue.

Despite the fact that many people assumed the Monopoly Man was a man, the character at the Equifax hearing was actually Amanda Werner, Campaign Manager with Americans for Financial Reform and Public Citizen. She told CNN about the thought process behind her epic photobomb:

I am dressed as the Monopoly Man to call attention to Equifax and Wells Fargo's use of forced arbitration as a get-out-of-jail-free card for massive misconduct. They use these ripoff clauses buried in the fine print to ensure that consumers can't join together to hold them accountable in court.

Werner sat two rows behind the former Equifax CEO as he testified, frowning through her white bushy moustache and frequently adjusting her monocle and top hat. She wore a sack of money around her neck... and was definitely able to drum up some attention for her cause on social media. She also carried a "Get out of jail free" card in a nod to the forced arbitration clause.

Also, one of my favorite things about this? The way all of the solemn, important people seated around the Monopoly Man pretend he's not there.

As Smith testified, claiming — as he had on Tuesday before the House Energy and Commerce Committee — that he was willing to shoulder "full responsibility" for the data breach, Werner as the Monopoly Man handed out "get out of jail free" cards. Because, as Public Citizen shared in a statement on Wednesday:

Forced arbitration clauses buried in the fine print of take-it-or-leave-it contracts may be the single most important tool that predatory banks, payday lenders, credit card companies and other financial institutions have used to escape accountability for cheating and defrauding consumers. These clauses push disputes into secretive arbitration proceedings rigged to favor financial companies and conceal wrongdoing from regulatory authorities. The average consumer forced into arbitration ends up paying more than $7,700 to the bank or lender, according to the Economic Policy Institute.

Werner also added, according to the same statement by Public Citizen:

Make no mistake: Arbitration is a rigged game, one that the bank nearly always wins. Shockingly, the average consumer forced to arbitrate with Wells Fargo was ordered to pay the bank nearly $11,000. Bank lobbyists and their allies in Congress are trying to overturn the CFPB’s rule so they can continue to rip off consumers with impunity.

As hilarious and strange as the Monopoly Man's photo bomb was, the real story here is the message behind his appearance. Because, according to critics like Werner, it's time companies relinquish this particular "Get out of jail free" card before they cost consumers even more money.