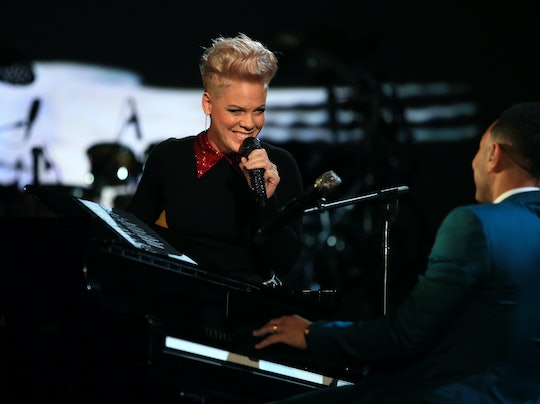 Pink's 2018 Grammys Look Will Give You Major Unicorn Vibes

Pink is not only nominated for a 2018 Grammy Award for Best Pop Solo Performance on her song "What About Us," but she'll also be performing at the awards ceremony. Her performances, especially on big stages, have a history of defying gravity in feats of acrobatic skill, showing off her strength and power. It's no surprise then, that Pink's 2018 Grammys look was equal parts bold and feminine.

It's the three-time Grammy Award winner's 19th nomination, although the only award she's ever won as a featured artist is Best Female Rock Vocal Performance. Her fellow nominees in the Best Pop Solo category are fellow industry veteran Kelly Clarkson, Kesha, whose redemption album Rainbow takes on new significance in the face of the #MeToo movement, Lady Gaga, and Ed Sheeran. The Grammys have never shied away from making powerful political statements on stage and this year will be no different, according to the LA Times. Pink's performance had to stand up against deeply moving ones from artists like Kesha, whose performance of "Praying" will feature an all-star lineup of guest collaborators including the Resistance Revival Chorus. Meanwhile, Logic performed his suicide prevention anthem "1-800-273-8255" with collaborators Alessia Cara and Khalid, joined on stage by more than a dozen survivors of attempted suicide and loved ones of those who have died by suicide.

Luckily, Pink has the support of her whole family on Grammy night. She posted this family portrait on Instagram of the whole clan gearing up for the awards, including her husband and former motocross racer Carey Hart, her 6-year-old daughter Willow, and her 1-year-old son Jameson.

Pink adorned her outfit and the outfits of all her family members with a white rose, the symbol adopted by the Grammy Awards to show solidarity with the Time's Up movement. According to People, the gesture was conceived by a group called Voices in Entertainment, which was formed by Meg Harkins, SVP of Marketing at Roc Nation, and Karen Rait, Rhythmic Promotion at Interscope/Geffen/A&M Records. Voices in Entertainment also includes 15 other women working in music. They wrote a letter to industry colleagues which read, in part:

"As we are inspired by the #timesup campaign, we are encouraging the artists that we work with and our colleagues attending the 60th Annual Grammy Awards in New York City to wear a white rose to the ceremony on Sunday, January 28th. We choose the white rose because historically it stands for hope, peace, sympathy and resistance."

The last time Pink performed at the Grammys, she suspended from the ceiling for a wild aerial routine, but for the 2018 Grammys, she opted for a stunningly stripped down number. She stood barefoot on stage in a simple off-the-shoulder white tee, jeans, understated makeup, and a no-fuss pixie cut, and she performed all by herself with the exception of an ASL interpreter, who signed along the lyrics to "Wild Hearts Can't Be Broken." Pink jumped in with a little ASL herself here and there, and the result was an intimate, powerfully subtle performance. Based on the pans over the audience once she finished singing, they seemed genuinely moved by her heartfelt ballad.

In the end, Pink lost out on the Best Pop Solo Performance Grammy to Ed Sheeran, who won for "The Shape of You," but wasn't on hand to accept the award himself. Her thoughtful performance was a huge accomplishment, though, and it definitely held its own amidst the other statement performances of the night. Per usual, Pink nailed it.