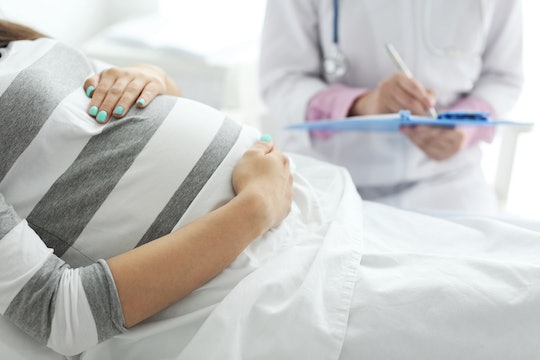 The placenta is kind of a mystery. It's difficult to study in pregnant women and open to a lot of misunderstanding because of that. A new study in mice, though, may help scientists better understood how the placenta works in humans as well. According to research, placentas may adapt to moms' poor diet or low oxygen. This may allow scientists to develop tests suited for people in order to make sure the placenta is working properly, which means improvements in care for mama and baby.

One reason the placenta is so mysterious that the placenta is a temporary organ. That means, unlike your heart, the placenta isn't always hanging around in your body, but, instead develops in your uterus during pregnancy, as noted by the Mayo Clinic. It gives plenty of nutrients and oxygen to a developing fetus and also removes waste from the baby's blood, according to the Mayo Clinic, so it plays a really critical role.

Doctors continue to learn more and more about the placenta every day. Past research has found it's not just a link between you and your baby, but it produces hormones and signaling molecules, too. According to What To Expect, these signaling molecules may do things like spur new blood vessels to form, get your body ready to make milk (and keep you from lactating before you give birth), or rev up your metabolism to give you additional energy when you need it most.

In a new mouse study, researchers have discovered one other possible function of the placenta.

In a study published in Proceedings of the National Academy of Sciences (PNAS), Cambridge researchers focused on analyzing the parts of the placental cells called mitochondria. The mitochondria is the powerhouse of the cell, as noted by Science Learning Hub, and they use oxygen to convert sugars into energy.

Through respirometry and molecular analysis, researchers studied how the mitochondria worked in the distinct transport and endocrine zones of the mouse placenta during normal pregnancy and maternal inhalation hypoxia (essentially, researchers created poor oxygen levels), as reported by the study's abstract.

We found that in the placenta, mitochondria have a remarkable ability to adapt and compensate for environmental impacts such as when women are living in low oxygen areas at high altitude and not eating enough of a healthy diet during pregnancy.

Understanding that the placenta might be capable of adapting to these kinds of conditions could mean that doctors can start to look into the reason why it may not do so during some pregnancies. When the placenta can't figure out how to adapt when challenges arise, that's when you may see complications such as fetal growth restriction, Dr Sferruzzi-Perri noted, as per Science Daily.

Also known as intrauterine growth restriction (IUG), it's a condition where a baby is smaller than expected because it didn't grow at a normal rate while developing in a uterus.

Dr. Sferruzzi-Perri said of the condition, according to Science Daily:

We know that there is a lasting impact on the health of babies born with fetal growth restriction because organs and tissues like the heart, pancreas, muscles, and liver, are very sensitive when they are developing in the womb. If those organs don't grow properly they are more likely to malfunction in later life.

Hopefully, this study will allow researchers to develop tests that can tell when placentas aren't functioning properly, and help provide vital treatments to those who need them.