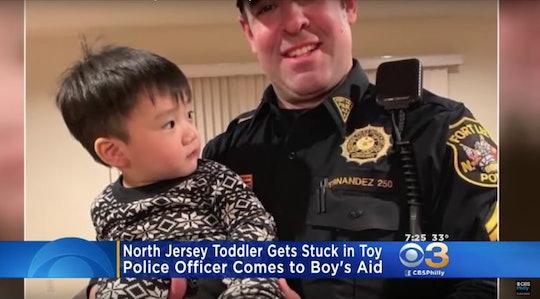 Police Rescued This Toddler Who Got Stuck In His Toy, So Obvi His Mom Took Photos

Every now and then, kids bless you with the perfect ammunition for picking on them later in life. Funny outfits, haircuts performed with safety scissors, and more — each the opportunity to share the hilarity with their future selves. So when this toddler got stuck in his own toy, his mom took some hilarious photos of him and his police rescuers that she plans to show him down the line.

When New Jersey mom Soona Choe's 20-month-old son Luca was playing with his new shape-sorting toy, he took the game a bit too far by climbing inside of it and getting stuck. “It’s kind of comical if you think about the situation,” she told CBS New York of the mishap. “He got in, got wedged in, and he couldn’t get out.”

But she wasn't laughing for long.

After trying and failing to get Luca out on her own — and snapping a photo or two of his situation — Choe called 911. And while she knew the call was necessary, Choe admitted that she was a little embarrassed to make it. “I’m like, ‘My kid’s stuck in a toy,’ and they’re like, ‘What kind of toy, what do you mean?’” Choe said, according to Inside Edition.

Sergeant Rick Hernandez was the Fort Lee PD police officer who responded to the call and he told My High Plains that even he found it all a bit funny. "It was a priceless expression on his face," Hernandez told the news outlet. "He had this face on like ‘yeah, I did it’. It was pretty cute ... He looked a little bit embarrassed about the situation."

Romper has reached out to the Fort Lee Police Department for comment on the operation, but has yet to hear back at the time of this publication.

The responders had a truck carrying the jaws-of-life on its way to the scene, as People reported, but Hernandez was able to get Luca out without them. “I asked Mom if I could break it, [and] she said ‘I tried, you can give it a shot,’” he said, according to People. “I was able to get off the front panel, it cracked.”

Hernandez further explained in a press conference after the event how he was able to get Luca out of the toy:

His knees and legs [were] underneath the lip on one side and his back was stuck up against the other side, so trying to pull him out would’ve caused injury to either the legs or the back. I was able to pull out the front panel. [But] when it cracked, his grandmother got frightened and screamed.

Scary noises aside, the toddler escaped the incident unscathed thanks to the valiant efforts of the Fort Lee Police Department. The department's followers praised Hernandez and his fellow officers for a job well done.

"Good job, I just can’t believe the things that children get stuck in," one person wrote on the Instagram post.

Another got a bit pun-ny on Facebook, saying “I bet he had to really think outside the box to get him out." LOL guys.

Once her son was safe and sound outside of the toy, Choe did what any mom with even the slightest sense of humor would do: she took even more photos to lord over him in the future. The final photo shows Luca being held by Hernandez, admittedly smiling slightly less than the officer.

Choe told ABC 7 News that she plans on bringing up Luca's accident, and bringing out the photos, periodically over the course of his life... as she should. As People noted, the specific brand and model of the toy is unclear, but the warning the experience inspires is clear: Keep a close eye on toddlers regardless of what they're doing applies regardless.