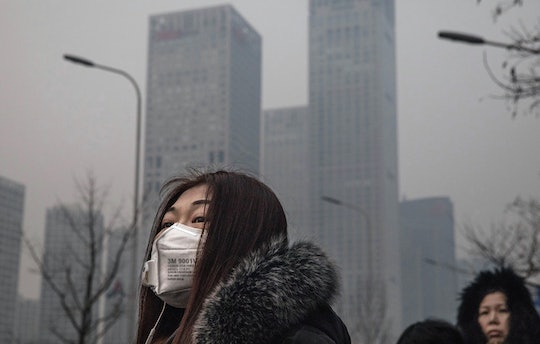 The Link Between Pollution & Infertility

Infertility can be caused by a number of factors, both internal and external. Doctors have been able to pinpoint certain behaviors and preconditions that likely up infertility risk, but, scarily enough, a lot of them are unavoidable. A recent study even revealed that pollution may be keeping you from getting pregnant, which could account for the uptick in infertility issues over the past few decades. These effects are long-lasting, and researchers have made it their mission to get to the bottom of things.

By and large, fertility rates are falling in the United States. The Centers for Disease Control and Prevention shares that 6 percent of married women in the United States, ages 15 to 44, have infertility issues lasting through a year of trying. Twelve percent of that same demographic (but regardless of marital status) also has "difficulty getting pregnant or carrying a pregnancy to term." Many couples turn to in vitro fertilization (IVF) as a solution, but it's nowhere near 100 percent effective, and pollutants appear to be a significant reason why.

In a study published in Reproductive Toxicology, researchers from the University of Albany examined the connections between pollution and infertility. Utilizing samples from 32 women who were undergoing IVF treatments, scientists looked for persistent organic pollutants (POPs) levels in each of them. In the end, findings revealed that elevated pollutant levels correlated with less effective IVF treatments; "Higher levels of POPs were associated with a lower probability for a live birth or pregnancy after IVF, as well as poorer embryo quality, response to administered fertility drugs and ovarian reserve," researcher Michael Bloom explained.

So what kind of pollution, or POPs, are considered especially detrimental? Scientists zeroed in on PCBs, DDT, and DDE. Although PCBs are no longer manufactured, they can still be found in old fluorescent lighting fixtures as well as electrical appliances. Whereas the insecticide DDT is no longer used, it still remains in the environment due to previous use; DDE has similar properties to DDT, as well as a similar history.

PCBs, DDT, and DDE all affect fertility in different ways, impacting factors such as embryo quality and egg reserve numbers. Researchers insist that women have been "exposed to the chemicals through ongoing contamination of food supplies" — an aspect of life that they essentially have no control over.

This isn't the first time that a link between IVF success and pollution has been investigated, as PCBs are linked to male infertility, too. The biggest issue with these pollutants is their invisibility. People are exposed to POPs unknowingly, so prevention of said pollutants is really not in one's own control. Now that this link has been discovered, though, there's even more concrete evidence pointing toward pollution's lasting detriments. Maybe these findings will send the strong necessary message that polluting has its consequences — consequences that can't be cleaned up overnight.